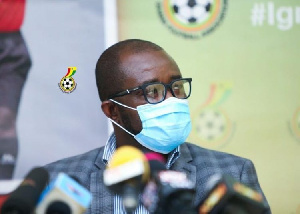 Five persons who will face Parliament over AFCON fiasco

The Parliamentary Select Committee on Youth, Sports and Culture is set to meet five stakeholders of football in Ghana as part of their investigations on Black Stars‘ poor performance at the just ended Africa Cup of Nations(AFCON).

Kobena Woyome, a Ranking Member on Parliament’s Select Committee said on GhanaWeb’s Sports Check program that the Sports Ministry, the Ghana Football Association, the Black Stars and the National Sports Authority(NSA) will appear before the committee.

The committee will begin their probing by first meeting the Minister of Youth and Sports, Mustapha Ussif on Wednesday, February 16, 2022. Then the chairman of the NSA, Patrick Twumasi will follow suit on Thursday, February 17.

Afterwards, the president of the football governing body, Kurt E S Okraku will appear next on Friday, February 18. Before a final meeting with the Black Stars captain, Andre Dede Ayew on Saturday, February 19.

Ghana football legend Stephen Appiah will also be invited by the committee to help investigate the issues.

As directed by the First Deputy Speaker of Parliament, Joseph Osei-Owusu, the committee is required to submit a report detailing what accounted for the Black Stars‘ abysmal performance at the AFCON and also suggest solution.

The call by Speaker Alban Bagbin came as a results of members of parliament raising concerns during a parliamentary debate on the Black Stars‘ shambolic display in Cameroon.

Among the many suggestion to see an upturn in performance by the national team, ranking member of the Youth and Sports Committee, Kobina Woyome, said:

“Mr Speaker, for us to see a positive turn around in Ghana’s football and giving the central role of sports in national development, and in fostering national unity, there is the need for the Government to, as a matter of urgency, initiate a process for a holistic sports development agenda that adopts short to long term approaches…”

Tags AFCON FACE fiasco five over PARLIAMENT PERSONS WHO WILL