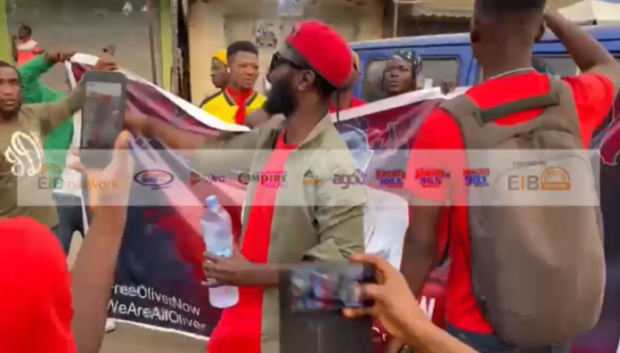 Scores of protesters and members of the Social activism group #FixTheCountry Movement have stormed the Ashaiman police district headquarters to show support to the Convener, Oliver Barker-Vormawor as police prepare to arraign him today.

Members of his social activism group were heard in a video captured from the scene chanting “We’re all Oliver…Free Oliver” in solidarity with the embattled Cambridge PhD Student’s arrest.

The Ghana Police Service is expected to today put before a court the convener of the #FixTheCountry Movement, Oliver Barker-Vormawor for making comments on social media that suggested a coup threat.

Mr. Barker-Vormawor was arrested on February 11 upon his return to the country from the UK.

According to members of the #FixTheCountry Movement, their convener has refused to eat or drink three days into his arrest.

The hunger strike is believed to be in protest of the government’s suppression of freedoms.