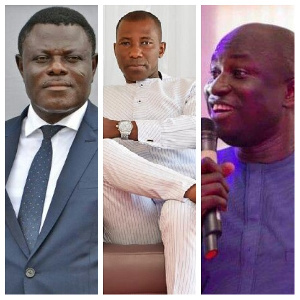 The football industry is known to be one of the most lucrative industries in the world if not the most. With footballers being sold for as high as $220million and sponsorship deals hitting billions of cedis, the sport is up there with the very best industries across the globe.

In Ghana, owing to a plethora of factors, the sport has not reached the enviable heights of the EPLs and La Ligas of this world but it still not a bad place to invest money.

The perennial challenges that have shackled the sport has made it unappealing to investors but a few celebrated Ghanaian business moguls have found reasons to pump money into talent development and grooming.

The reasons which serve stimulants to the thousands of cedis these entrepreneurs pump money into the game include sheer love for the game, making profit as well as genuine desire to help talented players pursue their careers.

GhanaWeb today, sheds light on four Ghanaian businessmen who either own or manage clubs in the country.

After serving us management member of Kumasi Asante Kotoko and providing assistance to various sporting personalities and institutions in the country, Kenpong has formed his own football club, known as the Kenpong Football Academy.

The club is being handled by former Black Stars coach Kwasi Appiah and based in Winneba.

Despite being a relatively new club, Kenpong Football Academy has made some strides with games against some of Ghana’s powerhouses including Kumasi Asante Kotoko.

Kenpong is confident that the academy will in few years produce some of Ghana’s best players.

Kenpong who is the owner of Kenpong Group of Companies has fleet of companies including Ice Gold Mineral Water, Kenpong Travel and Tour, among others.

Mospacka as he is known in the football space is the owner of Mospacka Group of companies which as per reports include Medeama FM, mining and steel merchandize companies.

Moses Armah became the owner of Medama Sporting Club after taking over Kessben FC in 2010.

He has since invested hugely in the club and made some huge impact in the Ghana Premier League.

He recently disclosed his desire to float the shares of the club.

The board chair of Kumasi Asante Kotoko became the owner of Bekwai Youth Football Academy in October 2021 after acquiring 100% shares in the team.

Kwame Kyei is the owner of Unity Oil, Sports Hotel and some media houses including Vision One and Light TV.

The club is being managed by his son, Nana Boadu.

After years of investing in Hearts of Oak, the CEO of TT Brothers, Isaac Tetteh broke away from the club to set up his own football club.

The club which competes in the division one league is known as Uncle T United.

Previous Bawku: 5 arrested over killing of four persons in renewed gunfight
Next Having sex everyday is abnormal – Therapist