Home / SPORTS / Four Ghanaian players who were abandoned by their fathers 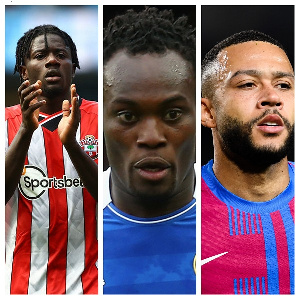 Four Ghanaian players who were abandoned by their fathers

Child neglect is a societal problem which occurs mostly when the parents split up. When there is a divorce, in most cases, the men tend to abandon their children leaving all responsibilities on the women.

It happens in many societies and Ghana is no exception.

Some Ghanaian players struggled in their early years due to divorce by their parents and being raised by their mothers alongside other siblings.

Here are four Ghanaian players who were were abandoned by their Ghanaian parents.

Memphis Depay was born to a Ghanaian father and a Dutch mother but was raised by his mother. His parents divorced when he was at age four and since then he has not had any contact with his father.

“I will never forgive him. Do not call me Depay, call me Memphis,” He told the BBC in an interview.

His father, Dennis Depay, in reaction denied the son’s claim of neglect , “saying that I didn’t see him after he was four is a lie,” he told the Sun. “It is unbelievable, it is not nice. He is my son and I love him. I am the man who gave him his first ball,” he said as quoted by mirror.uk.com.

“He was not abandoned by me. That is not true. I was always there for him.” he added.

Depay was eligible to play for Ghana but choose to play Netherlands instead.

Despite picking Netherlands over Ghana, the FC Barcelona forward have the West African Country at heart. He has a foundation in Ghana and visits from time to time.

Eintracht Frankfurt winger, Knauff is a German-born Ghanaian rising star who announced himself to the World in the 2021/2022 UEFA Europa League.

Knauff was born and bred in Göttingen. He was raised by his German mother and what lead to him been raised by a single parent is a mystery.

According to report, Black Stars head coach has already met the 19-year-old over a possible switch to play for Ghana.

However, the decision to switch nationality lies with the player and his family to decided.

The Borussia Dortmund player who is on-loan at Frankfurt has played for the German U-19, U-20 and U-21.

Mohammed Salisu was born and bred in Ghana and experienced single parenting.

He was raised by his mother after his father left the shores of Ghana when he was very young. His mother took care of him and his two other siblings.

According to Salisu, his mother did not want him to play football. He had to sneak out and play bare footed when his boots got destroyed by his mother.

All the mother wanted was to see his child in school.

“I used to play on the sand pitches with no boots. I always want to play football even when my parents wanted me to go to school. My mum took my shoes and spoilt them because I didn’t go to school,” he said upon joining Southampton recounting how far he has come.

He added that his mother is now proud of him after making it through football.

The Southampton man does not talk about his father because he has no connection with him.

The Chelsea legend was born in Ghana to Ghanaian parents but was raised by his mother. Michael Essien throughout his career did his best to keep his private life off the media space.

But in 2010, the midfielder’s name was in the news after his father, James Essien accused the player for neglecting him.

Essien parents divorced when he was young. Growing up, he lived with his mother until he left the shores of Ghana.

James threatened to sue Essien and claimed he will ensure the player stop using his family name.

After about a year, the player phoned his father to settle the issue.

“Michael Kwabena Amponsah Essien phoned me yesterday and we spoke at length,” James told Asempa FM in an interview in 2011.

“There was a misunderstanding between us but I want to world to know that we have solved this issue as father and son.

He then vow not to drag his child in the media again.

“I am very happy that my son took the bold step to call me for us to solve this problem. All the problems have been solved. May God bless him.

“I will never go to the radio station again or newspapers to talk about Michael in derogatory terms again.”

Source: www.ghanaweb.com
abandoned BY FATHERS Four;Ghanaian PLAYERS THEIR WERE WHO 2022-05-24
Elvis Anokye
Share

Tags abandoned BY FATHERS Four;Ghanaian PLAYERS THEIR WERE WHO