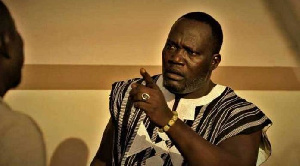 Popular movie producer, Prophet Benjamin Sarpong, has alleged that the late Bishop Bernard Nyarko who passed away sometime in May 2020, did not die a natural death as many thought.

Earlier, there were various assertions about the cause of Bishop Bernard Nyarko’s death.

Spanning from colon cancer to spiritual speculations, these are some of the causes attributed to the death of the popular Kumawood actor.

But in a new twist, Prophet Benjamin Sarpong has claimed that Bishop Bernard Nyarko was shot in the spirit spiritual realms.

According to the prophet, he was denied access to pray for the late Bishop Nyarko when his situation worsened, adding that he could have been saved.

“I told Zionfelix at a time Benard Nyarko was ill that he needed prayers. I told him that if prayers were not said, he could die and truly it happened. Tell Zion to give you the audio I sent to him. If I had prayed for him, he wouldn’t have died. God revealed to me that he was shot in the spirit,” he stated in an interview with Asempa FM monitored by GhanaWeb.