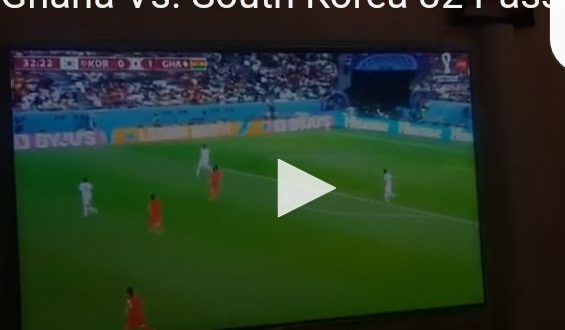 The Black Stars of Ghana won their first match at the 2022 FIFA World Cup after beating South Korea 3-2 at the Education City Stadium on Monday, November 28.

Ghana’s goals came through a Mohammed Salisu opener and a Mohammed Kudus strike in the first half of the game.

Kudus’ goal has since attracted some analysis relative to how it was worked out from the back starting with a pass from goalie Lawrence Ati Zigi.

A count showed that there were 32 passes between the Black Stars players in the lead-up to the goal which came from a Jordan Ayew cross and Mohammed Kudus header.

The ball came from the back through the midfield and close to the Korean box, it saw some midfield exchanges as the Ghana side tried to carve open the South Korean defence line.

Jordan’s cross was the first time the ball arrived in the opposition’s box and an oncoming Kudus was on hand to nod it home for the second goal.

In the second half, South Korea got back in the game as Cho Gue-sung scored twice within two minutes to restore parity for the Asians.

Mohammed Kudus was back on the score sheet after he connected a cutback from the left side of the Korean box to put Ghana ahead.

Otto Addo’s team had to sit on tight as the Koreans kept probing and pressuring for an equalizer in the final minutes of the high-tempo fixture.

Watch extended highlights of the match below:

It is the first time Ghana has scored three goals in a match at the FIFA World Cup. Kudus also becomes the first Ghanaian player to bag two goals in a World Cup game.

Ghana moves to the second spot in Group H where Portugal has already secured qualification after defeating Uruguay. The final group game for Ghana is against Uruguay.

Previous Police Officer forced me to bed, slept with me a whole night and got me pregnant – woman reveals
Next Ghana’s public debt increased by GH₵93bn due to cedi depreciation – Ofori-Atta