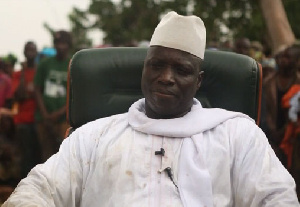 The Gambian Government has released a white paper accepting recommendations by the Truth, Reconciliation and Reparations Commission (TRRC) which conducted investigations into human rights violations committed under the presidency of Yahya Jammeh from July 1994 to January 2017.

The government would ensure prosecution of Jammeh and 13 other accomplices.

Mr William Nyarko, Coordinator, Jammeh2Justice (J2J) Ghana Coalition, disclosed these to the media at a press conference in Kumasi.

It bothered on the release of the Gambia Government White Paper on the TRRC recommendations on the Murder of 44 Ghanaians and other West Africans in the Gambia in 2005.

He said the government also accepts to pay the sum of D32, 400,000 (Thirty-two million, four hundred thousand Dalasis) to the West African Migrants and other non-Gambian nationals.

This amount is not reflected in the outstanding payment outlined in the TRRC report.

The reparations to these victims are to be paid through their respective governments as soon as possible, Mr Nyarko told the media.

The government, again accepts to work with their survivors and governments, through the independent reparations body to be created and also recognise the supplementary list of victims provided and grant them reparations in line with the provided guidelines on reparations.

Mr Nyarko who is also the Executive Director, Africa Center for International Law and Accountability (ACILA), said the government recognizes that victims have a right to reparations, which it has a corresponding obligation to fulfil and is in the process of developing a Victim’s Reparation Bill in consultations with stakeholders.

Mr Nyarko said the actions by the Gambian government were commendable and urged that governments in the West African sub-region must have deep respect for the lives of marginalized people.

Mr Emmanuel Gershon Oduro Mensah, Spokesperson for J2J Victims, called on the Government of Ghana to immediately engage with the Government of the Gambia for an upward revision of the compensation amount to reflect current awards made by the ECOWAS Community Court of Justice in cases of wrongful death, torture, unlawful detentions and enforced disappearances.

Madam Regina O. Amanfo, Jammeh2Justice GhanaProject Campaign Manager, Center for Democratic Governance (CDD-Ghana) said in 2018, a Coalition of Civil Society Organizations led by the CDD-Ghana was formed to revive the campaign as new evidence by international partners, Human Rights Watch and TRIAL International alleged that Ghanaians were unlawfully killed by the “Junglers”, a Gambian paramilitary group on the orders of president Jammeh.

Since the initiation of the campaign the coalition has undertaken several activities including engagements with key institutions such as the Ghana Police Service, Ministry of Justice and Attorney General’s Department, Ministry of Foreign Affairs, the Presidency, Parliamentary Select Committee on Foreign Affairs, media, CSOs and individuals among others.

Previous ‘I wasn’t after a response from the IGP at all,’ – British High Commissioner speaks
Next Nigerian players allege WNBA star Liz Cambage called them ‘monkeys’