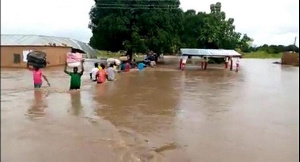 A ten (10) year-old-girl has reportedly been carried away by floodwaters after a heavy downpour on Tuesday afternoon in Koforidua.

The class three (3) pupil of King of Kings Preparatory school allegedly drowned while walking in the floods to the house after closing from school.

A search team made up of Police and residents led by the Assembly Member for the area Benard Acheampong have since been searching for the victim in the Nsukwao drainage.

The Assembly Member told Kasapa News the search party was at the Nkubem downstream of the drainage facility searching for the girl as at 6:00pm.

The Koforidua -Sentimental area was the worst affected after an hour and a half downpour.

The Eastern Regional Capital, Koforidua has been experiencing serious floods for about two months now after every heavy downpour.

On Monday, September 13, 2021 two hour rainfall for instance, the Municipality experienced one of the worst floods.

Some houses and walls collapsed as the floodwaters violently entered homes.

Many domestic animals particularly dogs, cats, sheep, goats, and hens were drowned and carried away by the floods.

Dozens of residents were displaced.

The President of the Republic, Nana Addo Dankwa Akufo-Addo on August 4, 2020 cut sod for the construction of the GH¢15,811,145.00 Nsukwao Basin Drainage Project, in Koforidua under the Ghana Secondary Cities Support Programme (GSCSP) of the World Bank to mitigate the perennial flooding situation in the Municipality.

The project is 95% completed.

However, residents are questioning the quality of work done since it has not fixed the flood problem.

For the victims, the Municipality is experiencing the worst flood situations in many decades.

“it looks as if the leadership of the nation is not serious. This Nsukwao drainage is funded by world bank. so We were expecting quality and excellent job, not this shoddy work. The consultant and contractor instead of breaking the old gutter and constructing a new gutter they didn’t do that rather did embarkment at just one side and it couldn’t solve the problem. Many people are homeless now” Stephen Akakpo said.

Another resident Michael Ofosu told Starr News ” We thought this project was to solve the flooding situation but it has become worst. The contractor did shoddy work. They should have excavated the gutter to 15ft. For the past 50 years, we have not witnessed such a magnitude of flooding in this area. It has destroyed everything. President and world bank should investigate this project”.

A civil Engineer, Nii Addy, whose house was seriously flooded and wall collapsed, lamented that “the drainage system is not well constructed. I am a civil Engineer so when they started this I told the MCE that this drainage that they are doing there will cause us in the near future. But they didn’t listen. He told me they have a consultant. This drainage system has tributaries -others joining it, so you need to dig this one down so all the tributaries will come and join it to flow but they didn’t do it like that, they just embarked one side so little rains cause flood”.

The Municipal Chief Executive for New Juaben South Isaac Apaw Gyasi however says the project had mitigated the impact of the flood stating that but for it, the situation would have been worst.

He however admitted some engineering errors which the assembly has drawn the attention of the engineer in charge of the project for rectification.