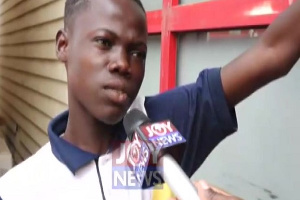 The emerging string of kidnapping in the country has become a canker and a worrying issue for the government and its security agencies.

In recent times, recurring instances of the kidnap of unsuspecting victims have sparked growing public fear, debate and mistrust in the security and other law enforcement agencies.

The story of Kojo Asante, a 14-year-old boy, is no different.

According to Kojo Asante, he was on his way back from school in Takoradi when he was whisked away by some men in a Toyota Hiace. After a long journey with his kidnappers, Kojo narrated that he found luck after he managed to steal his escape from the grips of the kidnappers.

He said the kidnappers, had parked somewhere in a bushy area and that was where he managed to flee.

“When I went to Kasoa, a man carrying two boxes asked me for help to his car, and I willingly did. The car was a Toyota Hiace, but I didn’t check the number. He pushed me inside the car, immediately I dropped the box inside and locked the door. I asked where he was taking me, but I got no answers.”

“I struggled but to no avail”, Kojo added.

He continued that, “we got to a bush which looked like someone’s farm and that is where I decided to escape.”

Narrating his ordeal to Joynews, Kojo Asante said he was unable to find his way home after his escape, so he had to hustle for about eight months on the streets of Takoradi before finally reuniting with his family.

The nation has been thrown into a debate about the whereabouts of the three girls kidnapped in Takoradi by some unknown persons. For which a suspect, Samuel Udoetuk Wills has been in Police custody for a while now assisting investigations.

These are, however, only a few of the many cases of kidnap reported in the past few months.

Find below a video of Kojo Asante’s narration of his ordeal;