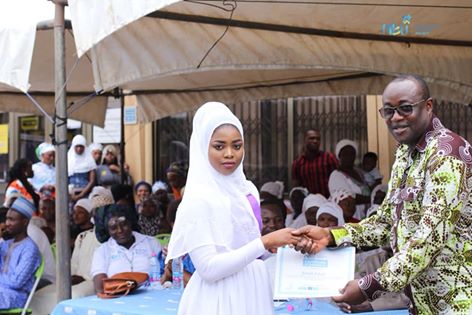 *2018 batch* of trainees enrolled under No Business As Usual (NBU) Project have graduated after completing a six months training program.

Out of 158 youths who were schooled in the area of core life skills and Employability, 40 were part of a gamma category whiles 83 and 35 were categorised under Beta and Alpha respectively.

55 trainees of the total number according to executives of the project have successfully gained job placements with 26 currently operating their own businesses.

By contrast, this is an improvement upon the recorded number of trainees for the year 2017 which stood at 42.

11 out of this figure were able to start their own businesses plus other 15 trainees who were gainfully employed.

Presenting her statistical report during a graduation ceremony held at the forecourt of NBU Project’s Hub at Asokore Mampong, Madam Esther Matey serving the capacity as the project coordinator announced that since the commencement of the project, 205 youth of Asokore Mampong have so far been trained as part of efforts towards ensuring that the rate of unemployment within the municipality is reduced drastically.

NBU Project which is scheduled to cover a period of four years she indicated is currently in its second year and hopes to train 500 youths within the Municipality.

“We have targeted to empower 65 percent of women out of the projected number”, she said.

Speaking during the event, Programs Director- SOS Children’s Villages Mr. Bernard Amoako disclosed that similar programs are underway to support youth within the municipality through their continuous partnership with the assembly.

The Assistant Director for the assembly Mr. Usman Morro adding his voice admitted that NBU Project has advanced the development of Asokore Mampong municipality.

He encouraged implementors to carry on with the good work and also challenged trainees to ensure an effective utilization of the skills and knowledge acquired through the training.