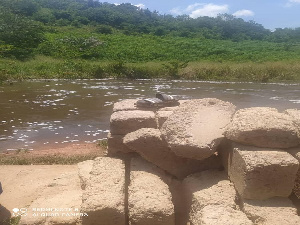 An 18-year-old okada rider has drowned at the Konorkle irrigation dam site near Oterkporlu in the Eastern Region when he went swimming on Sunday.

The deceased, identified as Kuma Justice Tettey, and said to hail from Yokonor, a village near Oterkporlu, had gone to the riverside with two friends named only as Tawiah and Tetteh at 9:30am when he decided to swim in the waterbody where he drowned in the process.

GhanaWeb gathered that the three had gone to the area to wash a motorcycle used for commercial purposes (okada) belonging to one of them when Kuma, who had never swam in the river, jumped in.

“He (deceased) together with his two friends, went to the riverside. One of them was going to wash his motorbike so while the two friends were washing the motorbike, he decided to swim and in the process he got drowned,” a source disclosed to GhanaWeb.

The Dadematse of the area was informed of the incident and local divers were mobilized where frantic searches were made for him in the presence of police personnel from Oterkporlu.

After an hour of searching, Kuma’s lifeless body was found at the same spot of the river where it was retrieved and subsequently conveyed by the police to the Atua Government Hospital where it was deposited for preservation and autopsy.

This portal also gathered that this is the second time in two years that such an incident has happened in the area.

Gay man of 20 years tells how he quit