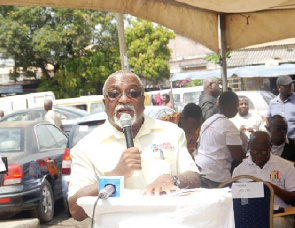 Two dead bodies have been retrieved from the Odaw River in Accra in the past two weeks.

He made the disclosure last Friday during a public education forum organised by Jekora Ventures, a waste management organisation, in collaboration with the National Commission for Civic Education (NCCE).

He, therefore, appealed to the people to support the assembly to improve the sanitation situation and eventually rid the place completely of waste.

At the forum, the Accra Metro Director of NCCE, Mr Tetteh Wayo, urged district assemblies to make their sanitation by-laws available to the people to help tackle sanitation problems in society.

He observed that majority of the people indulged in improper sanitation practices because they had no knowledge about these by-laws as well as their civic responsibilities.

“The problem is that these laws are made and kept on the shelves of the assemblies and are not made known to the people.

Because of the ignorance of the law, people just do things their own way. So what is the essence of coming up with these laws?” Mr Wayo queried.

Mr Wayo was addressing a gathering in Accra last Friday to sensitise the public to sanitation issues and to help devise new ways in managing waste.

“It behoves the assemblies to make these laws known to the people so that they will desist from acts of indiscipline,” he said.

Mr Wayo encouraged the assemblies to carry out massive education on the by-laws to make the people more informed.

“Once they become aware of the laws, half of the problem is solved because they will act more responsibly.

We at the NCCE will also continue to support and make sure we carry out our duty to educate the public on these assembly by-laws,” he said.

The Managing Director of Jekora Ventures, Mr Immanuel B. Nartey-Tokoli, bemoaned the ascendancy of illegal “borla taxi” operators whose activities, he said, compounded the sanitation situation facing the country.

He noted that because such operators were not properly supervised and regulated, they tended to dispose rubbish at unauthorised places, including the streets, pavements and in rivers.

He, therefore, expressed his readiness to adopt such operators who were within his area of operation and who were willing to operate legally to ensure they operated properly.

Touching on the issue of plastic waste, Mr Nartey-Tokoli said “plastic is a big problem in this country and a major cause of flooding. Therefore, we are coming up with an innovative means to check the situation”.