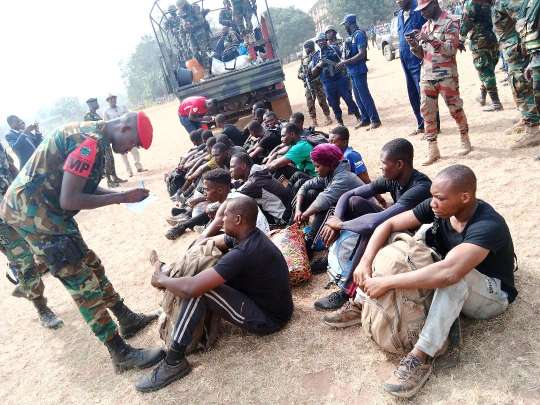 The state has charged 29 out of the 51 persons who are being held over attempts to secede from Ghana with treason felony.

The 29 are also facing five additional charges to wit conspiracy to commit crime, causing unlawful damage, rioting with weapons and participation in a campaign of a prohibited organization.

In Court on Wednesday, prosecution led by Assistant Superintendent of Police (ASP) Sylvester Asare filed an amended charge sheet containing the above charges against the 29 persons.

The Circuit Court in Accra, however, discharged the remaining 22 arraigned for their respective roles in the disturbing incidents in the Volta Region.

The Prosecutor Sylvester Asare told the court that they have gone far with investigations and prayed the court not to grant bail for the remaining 29 accused persons.

No reasons were given to the court by the prosecution on why the 22 have been let go.

According to him, remanding the accused persons will enable the prosecution speed up with investigations.

According to him, his clients have well-meaning members of society to stand as sureties for them. He said the accused persons also have their permanent place of abode.

But the court presided over by Her Honour Rosemary Baah Torsu remanded the 29 accused persons while and adjourning the case to November 19, 2020.

In a related development, another set of 27 of the accused persons who are currently on remand will reappear on November 9.