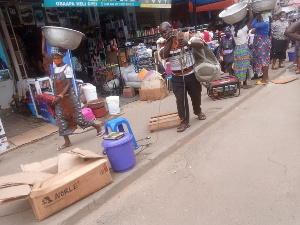 The Nkawie Circuit Court has convicted five street preachers to a fine of GH¢600.00 for making noise at Abuakwa in the Atwima-Nwabiagya South Municipality.

The court in the Ashanti Region convicted Abraham Kobina, Kwaku Boateng, Benjamin Owusu, Frank Agyei and Daniel Anokye on their plea of guilty and would serve a year imprisonment each in default of the fine.

They were bonded to be of good behaviour for a year or serve six months imprisonment each.

Mr Robert Forson, the Municipal Environmental Health Officer, told the court presided by Mr Johnson Abbey that the convicts used to preach with loudspeakers which disturbed public peace at different streets at Abuakwa.

He said the Assembly received complaints from the public and warned them through the environmental health department to reduce the noise, but they refused.

Mr Forson said on June 25 this year, officials from the department went and measured their noise level with a calibration machine and recorded beyond the approved 75-decibel level.

They were arrested and after investigations brought before the court.

Minority Leader wants number of MPs to be capped