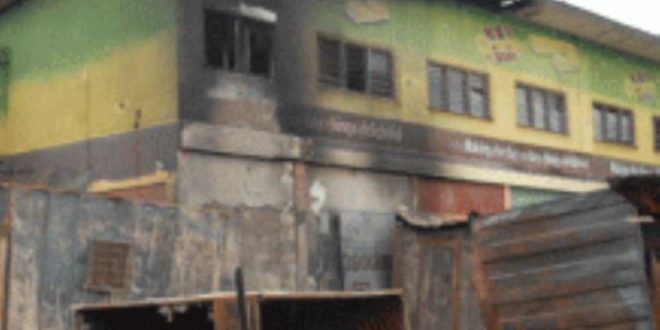 A fire outbreak on Easter Saturday night destroyed several shops at the Asafo Market in Kumasi,  the Ashanti regional capital less than a day after a similar incident was recorded at the Kumasi Central Market.

MyNewsGh.com had earlier reported about fire outbreak which reduced wares of traders  at the Kumasi  Central Market on Easter Friday estimated at several millions of  Ghana cedis into ashes.

Just when residents were yet to get out of that shock, there were confirmed reports another fire outbreak within the Kumasi Metropolis this time a number of shops at Asafo Market.

The fire which started at footwear manufacturing area at the main entrance spread to the storey building destroying several things according to officials of the Ghana National Fire Service (GNFS) who were called in to douse the inferno.

The cause of the fire is not yet known meanwhile Fire fighters have commenced investigation into the matter.

Over 500 traders in the market have lost their properties and capital.

It took the timely intervention of personnel from Ghana Fire Service who spent several hours  to douse the inferno.