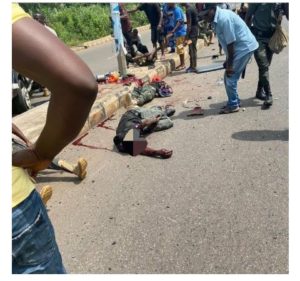 A 55-year-old man met his untimely death on Monday, February 1, 2021, at Asamankese in the West Akim Municipal Assembly in the Eastern Region.

The deceased, Mohammed Donkor, was a night watchman at Asamankese Senior High School and was on his way to work on Monday evening when he was knocked down by a truck.

At about 6:30 pm on Monday, suspect driver Isaac Armah who is also a mechanic, 36, was in charge of an unregistered Hyundai Mighty truck heading from Estate, a suburb of Asamankese, to Second Gate.

On reaching a section of the road at old Zongo, the driver reportedly lost control of the steering wheel and slammed into the deceased Mohammed Donkor who was standing on the shoulders of the road making a phone call.

The truck hit him into a wall of a nearby building with the deceased sustaining serious injuries.

He was quickly rushed to the Asamankese Government Hospital but was pronounced dead on arrival.

According to eyewitnesses, the suspect driver Isaac Armah who was moving at top speed was also on the phone when he run into the deceased.

His body has been deposited at the Asamankese Government Hospital morgue awaiting autopsy while the suspect driver who bolted after the incident is in the grips of the Police.