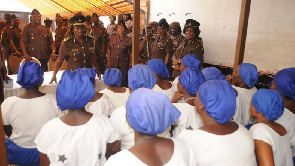 Eight married women are on death sentences at the Nsawam Medium Security Prisons, it has been revealed.

The women were behind bars for crimes they committed against their husbands, the Nsawam Medium Security Prisons Chaplain, Chief Superintendent of Prisons, Martin Padi revealed.

He made the disclosure when this portal visited the prisons on Saturday.

Although he did not mention the specific crimes they committed, the Chaplain noted that they were on condemned not for stealing or robbery but for harming the very men they said “I do” with on the altar.

He also revealed that there were about 3,450 inmates at the Nsawam Prisons, were some considered condemned, convict and those on remand.