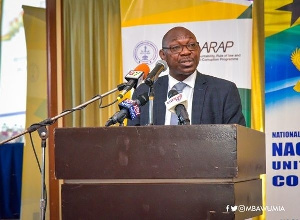 • Supreme Court Judge says the inconsistent witness accounts will not affect the outcome of the case.

• The trial case involving the former COCOBOD boss has been ongoing for more than a year.

The judge sitting on the trial of the former COCOBOD boss and two others has emphasized that it is normal for prosecution witnesses to contradict themselves during cross-examination without affecting the case.

Justice Clemence Honyenuga observed that it is the duty of a judge to decide whether the inconsistencies of prosecution witnesses could inure to the benefit of the accused persons.

His decision has thrown some legal experts off-balance concerning proof beyond a reasonable doubt; the traditional standard of proof that must be exceeded to secure a guilty verdict in a criminal case in a court of law.

“Proof beyond a reasonable doubt,” leaves no reservation about the defendant’s guilt or otherwise.

Justice Honyenuga’s observation was contained in the 89-page ruling by the judge on the submissions of no case filed by former COCOBOD boss, Dr Stephen Opuni, businessman Seidu Agongo, and Agricult Ghana Limited.

The judge dismissed the submissions of no case in his judgement delivered on May 7, 2021.

Interestingly, the grounds for the dismissal, have also been attacked roundly with lawyers noting that Justice Honyenuga’s reasoning was riddled with errors as they head to the Appeals Court.

The judge had cited, for instance, the account of the first prosecution witness, Dr. Franklin Manu Amoah (PW1) who under oath alleged that Dr. Opuni orally ordered him and some top scientists at CRIG to shorten the testing of agrochemicals, a directive the witness himself said was not followed.

Even in his written statement to investigators on April 26, 2017, which is in Exhibit, Dr. Amoah, said he refused to follow any directives to shorten the testing period.

Dr. Amoah who was the Executive Director of CRIG’s account was contradicted by that of the seventh prosecution witness, Detective Chief Inspector Thomas Prempeh Mercer.

This is what the trial investigator said under cross-examination led by Samuel Codjoe, counsel for Dr Opuni, on Monday, March 1, 2021:

The CID man said: “But in a statement which is in evidence in this court given by Dr F Amoah the then-Executive Director of CRIG, which Counsel for A1 made me read in this court clearly indicate that A1 actually called a meeting of scientists in his office in Accra Cocoa House. It is on this basis that when Dr F M. Amoah was writing his statements, he stated that on his return from Accra he called a meeting of all the Senior Scientists and told them not to adhere to the directives given by A1. So this goes to confirm that indeed there was a directive and My Lord, I want to state that this directive was carried out. That is why the shortening of Lithovit was carried out.”

For emphasis, the lawyer asked, “Chief Inspector Prempeh, you just informed this court that Dr Amoah stated that he informed the Scientists not to follow the directives. Isn’t it?”

The investigator answered, “Yes My Lord, and I continued by saying that indeed that directive was carried out to the letter.”

This allegation has vehemently been denied by Dr. Opuni.

Interestingly, except for Dr. Amoah, persons the investigator had claimed, under cross-examination, that they were present when the directive was given did not corroborate that account in their statement to investigators.

The trial investigator could not also independently prove that claim in court with any other evidence aside from what was alleged by Dr Amoah, however, Justice Honyenuga, a Justice of the Supreme Court sitting as an additional High Court judge, declared:

It also played out in court that Dr Amoah’s account before an investigative/disciplinary committee set up by COCOBOD, and what he gave in court on a certificate he signed to approve lithovit fertilizer varied.

Moreover, Dr Amoah during cross-examination said he was satisfied with the scientific report of his team on Lithovit fertilizers, despite his own claim that it was tested for 6 months, and went ahead to issue the certificate authorizing the purchase of the fertilizer which some farmers have stated had increased their cocoa yields.

But the judge noted, “In any case whatever, PW1 stated before the committee was not on oath.”

Interestingly, although the submissions of prosecution witnesses that fertilizer has to be tested for two years by CRIG were not supported with any documentary proof, the judge upheld them.

This was conveniently done after Justice Honyenuga.

CRIG’s letter which is in evidence as Exhibit H page 73, dated September 22, 2017, under the headline “RE: QUERY – TESTING OF AGROCHEMICALS” reads in full: “There are no laid down protocols as such. With the advent of the testing of chemicals and machines at CRIG, Scientists in the various Scientific Divisions evolved their own protocol based on standard scientific procedures.

Rev. Fr. E.K. Oddoye, the then Deputy Executive Director, has not been called as a prosecution witness to speak to his crucial letter.

Persons who have been following the case are not surprised by the Judge’s stance on witnesses contradicting themselves with reference to the decision he took on a perjury case involving the third prosecution witness, Dr Yaw Adu-Ampomah.

Justice Honyenuga, asserted that the powers of the court “must be employed in exceptional circumstances” and should “be used sparingly”, adding it was “a wise precaution” to postpone some actions, noting that in a situation where Dr Opuni or Agongo are convicted, the perjury can be used to quash that decision upon appeal.

A total of 27 charges were levelled against Dr Stephen Opuni and businessman, Seidu Agongo, including willfully causing financial loss to the state and contravention of the Public Procurement Act.

They have both pleaded not guilty to the charges and are on a GHS 300,000 self-recognizance bail each.

VIDEO: Arrest Close Friends Of Leticia & All Teachers In The School – Opambour To Police