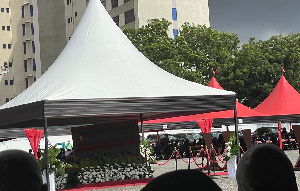 • Justice Samuel Kofi Marful-Sau who was a Supreme Court judge died on August 10, 2021

• He was appointed Supreme Court judge in 2018

• He left behind a wife and 4 children

Of all the tributes read during the state burial of the late Supreme Court Justice, Samuel Marful-Sau, the words put together by his children in celebration of their father surely hit differently when they were read.

The children, while reading the tribute of their father, narrated how during his last days Justice Marful-Sau communicated by “blowing of kisses, raising of a fist and pointing up to God” any time he was visited.

“Everything happened so quickly and unexpectedly, we did not have the opportunity to bid you farewell. When Enid and Valerie saw you on the last Friday, you blew them kisses, raised a fist and pointed up to God. Little did we know that those would be the last gestures we will ever attribute to you,” the eldest son, Alvin read.

The four children of the late Supreme Court judge, in their tribute, described their late father as God-fearing, good, a devoted father, selfless and humble.

They added that their ate father accomplished his purpose and is resting in the bosom of his maker.

“You found God, you found your purpose, you accomplished your purpose and now you are resting in the bosom of your maker and father,” their tribute said.

Read the full details of their tribute below:

Source: www.ghanaweb.com
Related Topics:Marful-Sau
Up Next