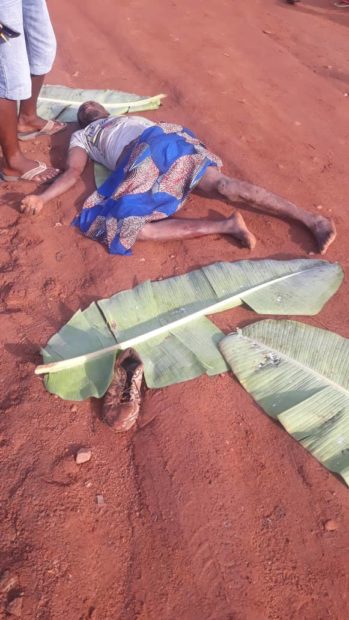 A 32-year old coconut seller on Saturday October 16,2021 found dead at Nyankyerenease cemetery in the Kwadaso Municipality of the Ashanti Region
Eye witness told OTEC News Kwame Agyenim Boateng that the deceased, identified only as Bro Kwame was discovered dead in the early hours of  Saturday October 16,2021 at about 7-am.
The cause of the man’s death has not been established. However, some residents who were at the scene suspected foul play, alleging that he might have been beating to death by some unknown assailants
The deceased a according to report was moving from Bokankye to Nyankyerenease at dawn  when he met his untimely dead.
Some residents speaking to OTEC News indicated that a passerby who was using  a road closed to the scene initially bumped into the man lying unconscious on the ground
The attention of those in the are were  immediately drawn to the scene after the passerby raised an alarm to attract other neighbours to the scene.
A witness name withheld disclosed that the unconscious man was initially rushed to a nearby hospital but was pronounced dead upon arrival
The body was however sent back the scene where the deceased was found dying after he was declared dead at the hospital.
Police were later called to  the scene to convey the body to the Okomfo Anokye Teaching Hospital morgue for autopsy
Source: otecfmghana.com
Related Topics:COCONUT SELLERfound dead
Up Next