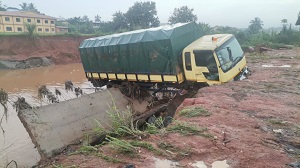 Seven people were feared drowned following heavy rains at Ahenema- Kokoben in the Atwima -Kwanwoma District of the Ashanti Region on Monday, September 28, 2021.

Kumasi and its neighbouring districts have been witnessing heavy rains for the last couple of days as many parts of metropolis were flooded after the torrential rains which continued for over four hours.

According to unconfirmed reports, they allegedly fell into the Aboabo stream at the Ahenema- Kokoben which had over flooded after about two hours of a downpour.

The missing persons , according to eye witnesses were said to have drowned after they attempted to escape from their respective cars which were  been swept away by the river

Speaking to OTEC News Kwame Agyenim Boateng some eyewitnesses said  although they saw the victims struggling in the river, they could not do anything to save the them  due to the strong current of the running water.

“We saw them being swept away helplessly, however, nothing could be done about the situation,” Kwadwo Busumuru, a resident of Ahenema Kokoben , told Kumasi based  OTEC FM.

He added that the exact number of poeple swept away by the river is unknown to them, adding that there could be more missing.

They appealed to security agencies to as a matter of urgency dispatch a search to the area and find the missing persons.

Many properties have been destroyed, while officials of the NADMO work around the clock to assist those affected.

Related Topics:Seven drowned
Up Next