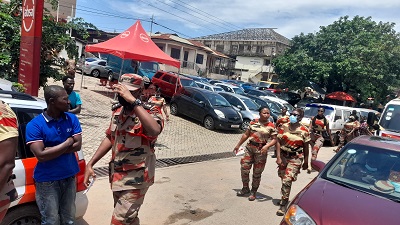 Breman Fire Station of the Ashanti Regional Command of the Ghana National Fire Service (GNFS) has launched a Fire Safety Education campaign to step up fire safety sensitization among residents in the municipality.

The campaign, which is a one week activity, is dubbed “Kure Gya” to wit ‘Hold Fire, Control Fire’, and is aimed at creating awareness on fire prevention and its control.

Launching the campaign on Monday, September 27, 2021, at the fire station at Breman, in the Suame municipal, the Municipal Fire Commander, Prosper Selassie Amevor, said they have already engaged churches.

Outlining the week long campaign, he said “today (Monday) we will engage the people on the Breman-Suame roundabout streets. On Tuesday, we will go to the both JHS and SHS and give them the education on fire prevention and its control.”

“We have dedicated the whole of Thursday to Suame Magazine, which about twenty zones, sensitized them on the need to avoid illegal connection of electricity power, which is number cause fire outbreaks in the area. On Friday, we will have talks with the Muslim communities at the various mosques within the vicinity,” he added.

During the campaign, the fire service personnel with engage the people one-on-one to educate them on fire prevention and control measures, give them stickers with telephone help lines on them in case of emergencies.

This, according to GNFS, at the end of the campaign, the public will understand the works of the GNFS, clear some bad perceptions or image about them and also draw the public closer to them.

On fire outbreaks in the Ashanti region, the Public Relations Officer for the Ashanti Regional Command of the GNFS, DOIII Dsemond Ackah, disclosed that the region has made some inroads in fire prevention, by reducing it by 16%.

He attributed the reduction to a vigorous campaign strategy they adopted at the start of the 2021 year, saying “we engaged school children, traders, market women, and more importantly the provision of a fire tender which periodically goes around the satellite market to prevent fire outbreaks,” DOIII Ackah added.

He was of the view that more public engagements will further reduce the fire outbreaks in the region and pleaded with the media institutions to also assist by way of providing them free air times to educate the masses on fire prevention and its control.

Related Topics:FIRE SERVICE
Up Next