Home / GENERAL NEWS / A/R: NABCO Boss has no office; operates from his car and premises of radio stations 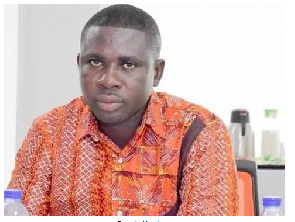 A/R: NABCO Boss has no office; operates from his car and premises of radio stations

The lack of an office space has compelled the Ashanti Regional Coordinator of the Nation Builders Corps (NABCO), Dennis Kwakwa t o operate from the trunk of his private car and radio stations where he goes to speak as a communicator of the party.

Kwakwa himself in an interview MyNewsGh.com monitored has admitted beneficiaries of the program struggle to locate him and other officers since they have no permanent working space.

Speaking with Kwame Tanko on Kumasi-based Angel FM and monitored by MyNewsGh.Com, Dennis Kwakwa rather jokingly said “beneficiaries should listen out for me on radio stations and find me there after I have finished speaking”.

When the show host, Kwame Tanko had sought to advocate for the immediate allocation of an office for the Ashanti Regional NABCO Coordinator, the latter pleaded for restraint as he said government was in the process of finding him one.

He said, realising the enormity of the problem and how embarrassing it is becoming, the Ashanti Regional Minister, Hon. Simon Osei Mensah has assured him of a full office space soon.

The Nation Builders Corps (NABCO) programme is a government initiative to address graduate unemployment to solve social problems. The focus of the initiative according to government is aimed solving public service delivery in health, education, agriculture, technology, governance and drive revenue mobilization and collection.

NABCO’s central focus is to create employment avenues and opportunities for young graduates from accredited tertiary institutions and enhance the dignity and self-esteem of the country’s graduates, as well as present them with added benefits of efficiency and effectiveness in the delivery of some essential public services.

Explaining the objective of establishing NABCO, President Akufo-Addo said the dreary story of youth unemployment had been a scar on the nation’s history, which was further aggravated in recent times by the moratorium placed on public sector employment by the International Monetary Fund (IMF).

President Akufo-Addo said in view of this predicament and mishap, the 2018 budget statement provided an indication of a new employment scheme which would tackle the issue of the growing number of unemployed graduates in the country.