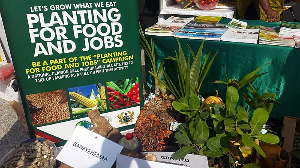 District Chief Executive (DCE), South Dayi, Ernest Patrick Kodzo Mallet, has disclosed that a total of 5,000 farmers have registered for Planting for Food and Jobs (PFJ) initiative in the District.

He, however, said the figure was far less than the estimated number of 30,000, indicating that most farmers did not take advantage of the programme despite efforts made to increase outlets for the distribution of the subsidised farm inputs from one in 2017, to 10 in 2020.

The DCE said Planting for Export and Rural Development (PERD), was still ongoing in the District, and that over 10,000 oil palm and 20,000 cashew seedlings were distributed to farmers freely and plans were underway for more to be nursed.

Mr Mallet was speaking at the District’s commemoration of the 36th National Farmers’ Day at Tongor-Dzemeni on the theme: “Ensuring agribusiness development under COVID-19: Challenges and opportunities.”

He described the theme as timely and opportune as the Assembly was putting all the necessary preparatory measures in place for its next Medium- Term Development Plan.

The DCE said his outfit was making all necessary efforts to make agriculture a business and attractive to the people in the District, adding that “understanding the business of agriculture is what will make our farmers more innovative, accept new technologies and diversify their operations.”

Mr Mallet said the Assembly would pursue agriculture for development as an entrepreneurship, enabling farmers and all actors within their respective value chain engage in the venture using business and economics principles.

He said the Non-Formal Education Division and the Department of Agriculture would soon rollout a programme, he called “Agripreneurship” aimed at equipping farmers to approach agriculture as a business.

“Seeing agriculture as a business will motivate our farmers to move from hoe-cutlass agriculture to feed only their families to mechanised commercial agriculture,” he stated.

The DCE entreated residents in the District to engage in backyard and in-house agriculture so they could have regular fresh food, especially vegetables to supplement their incomes.

Mr Enoch Dzadzra, District Director of Agriculture said his outfit had taken delivery of 500 cockerels to be distributed to farmers in the District at a subsidised price to improve production of poultry in the District.

He said the Ghana Agriculture Sector Investment Programme (GASIP) was working with the Department of Agriculture in the District to build capacity of farmers to respond to issues relating to climate change, disclosing that a total of 120 farmers had already been trained on “climate smart agriculture and general agric practices.”

Mr Dzadzra said some livestock farmers were provided with skills training on how to raise their livestock, formulate feed, diagnose disease and initiate remedies in poultry, pigs, goats and sheep.

He disclosed that a total of 385.6 acres of farmlands were attacked by fall army worm during the major and minor seasons, which affected 683 farmers, made up of 452 males and 231 females.

Mr Dzadzra however, said the District was supplied with 171 litres and 988 sachets of control chemicals and applied them on the affected lands, leading to their recovery.

A total of nine deserving famers were awarded during the celebration, with Mr Bamo Nsambeh, 49, from Wegbe Wawase, emerging the overall best farmer of the District and took home one motor Tricycle, six crocodile machetes, two wellington boots, one cloth and a certificate.