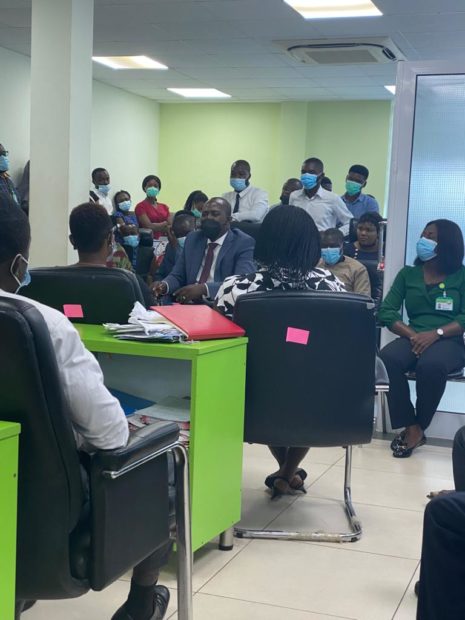 The Acting Greater Accra Regional Lands Officer, Timothy Anyidoho Esq. has urged staff working with the Public and Vested Lands Management Division of the Lands commission to work diligently to change the narrative at the Commission.

He made the call during an engagement with staff. The engagement which took place at the Greater Accra Regional Office came on the back of series of engagements he has been embarking on with the different divisions of the Commission for them to realize the unique opportunity and privilege to be working with the lands commission and ensure that everyone contributes their quota so we deliver on our mandate.

The Acting Regional Lands officer again entreated staff to eschew all forms of negative attitudes which affect the image of the Lands Commission negatively and described the state of affairs currently at the Commission as one that needs to be salvaged as a matter of urgency. He tasked staff to place their job first and act in a more professional manner.
During his remarks, he highlighted issues pertaining to Rent seeking which he mentioned amongst others as one of the major issues maligning the smooth operation of the commission.

There is the need to have a change in attitude towards work if we want the Commission to be seen as more viable, he reiterated. The Head of the Public and Vested Lands Division of the Region, Mr. Osei Owusu Peprah reiterated the need to build stronger teams and accord each other the needed respect. he indicated that, customer relations are one of the key issues that must be emphasized since the Commission is a service providing institution and has an onerous task of handling clients from different walks of live. Customers are now more demanding and hence, the need to be enlightened on the activities of the commission and be treated with the utmost respect and care.

He assured staff of an open door policy and encouraged them to come up with ideas that will enhance productivity.

He emphasized that using one’s time profitably is necessary to change the narrative. According to the Acting head of PVLMD, plans are far advanced to rollout the consolidated search to the public. This he mentioned will start from 1st October,2021.
This move according to him will reduce the turnaround time for doing registration and searches.
A consolidated search is a search that encapsulates information from different divisions into one report to aid the applicant in decision making on the authenticity of a land they are trying to acquire.