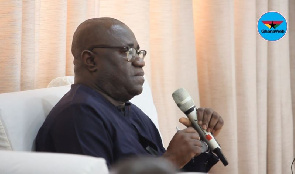 Adisadel College set to boil again as Board and GES collide

A Security Analyst with the Kofi Annan Peace Keeping and Training Centre, Dr. Kwesi Aning has bemoaned the helplessness of the Ghana Police Service in executing its core mandate.

He argued that the mandate and independence of the Service has been so undermined such that it makes it difficult for the police to prevent crimes such as political violence.

Many have questioned the professionalism of operatives of the National Security following clashes that occurred between some masked officers and unarmed citizens during the Ayawaso West Wuogon Constituency by-election and have called for more efforts to equip the security agencies.

But, Dr. Aning believes the current turn of events is a result of the non-availability of resources needed to enable these agencies to deliver on their core mandate.

“We have institutions that can and ought to have prevented the development all the way to where we are. Unfortunately, those institutions have not been able to do so. If you read Act 350 (1970) that is the Ghana Police Services Act, the core functions of the police is to protect lives and properties but since the 1960s, that has almost become impossible.”

“Every commission of inquiry that has been established concerning the Ghana Police Service dysfunctionality and its challenges have consistently spoken about the need to strengthen the capacity; but even more importantly, the independence of the police service to be able to perform its statutory functions. The service over time has been undermined to such an extent that we have a hollow institution, incapable, unwilling, and frightened to prevent,” he added.

Giving his expert testimony at the Emile Short Commission, on Monday, Dr. Kwesi Aning also identified the multiplicity of parallel security institutions as another challenge to the Police Service.

“We have a National Election Security Taskforce that routinely during elections ought to be mandated and operationalized to ensure that we don’t have the violence that we see. For example, this taskforce is not supported by law. The Inspector General of Police will establish this at the national, regional, metropolitan, municipal and the district level.”

“But somewhere in the constitution also says that no organization can be formed that contradicts the functions of the National Security Council, so the capacity to prevent is undermined by the multiplicities of legal frameworks that we have in the country.”

Amend the constitution to make us more independent – Police Service

The Ghana Police Service has expressed concerns about the composition of its Council.

According to the service, the representatives on the Council are mainly appointees of the President, a situation which cripples their independence and professionalism.

The Service said the situation is inhibiting its ability to clamp down on the activities of vigilante groups.

Director of Transformation Programmes Office of the Ghana Police Service, ACP Benjamin Agordzor called for the de-politicization of the Council to enable the Police Service to work objectively without interference.