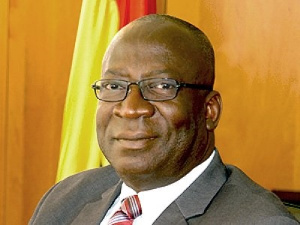 The Aircraft Accident and Incident Investigation and Prevention Bureau has appointed Air Commodore (Rtd) Kwame Mamphey as the Investigator-in-Charge (IIC) of investigations into the KLM Aircraft incident that occurred on September 3, this year, at the Kotoka International Airport.

A statement issued by the Bureau in Accra on September 6, said the Investigator-in-charge was to ensure effective management of the investigation process.

The investigation, according to the statement, would focus on the determination of the causes and contributing factors leading to the incident, preparation of a report, and safety recommendation where applicable.

The Bureau, it said, had forwarded notification of the incident to the State of Registry, State of Operator, State of Design, State of Manufacture, and ICAO, and has shown its indication of the extent of the investigation to be conducted.

The statement noted that the Bureau, in line with international practices, had assembled all relevant data before the aircraft was released, as it was assessed to be airworthy after the incident.

It said the granting of the aircraft permission to fly off to Amsterdam would not place any negative effect on the investigation process.

The statement called on all stakeholders to provide the needed support and co-operation for the successful conduct of the investigation.

It is recalled that an Amsterdam-bound KLM flight incident resulted in an aborted take-off at the Kotoka International Airport on September 3.

The incident involved a bird strike close to the windshield of the aircraft, compelling the flight captain to apply emergency brakes and aborting a take-off.

In the process, two tyres deflated while two others got worn out and the aircraft was towed to the ramp.

All passengers on board the flight were disembarked with no casualties.

In accordance with Section 17(b) of the Aircraft Accident and Incident Investigation and Prevention Act 2020, Act 1028, the Commissioner is granted the powers to institute an investigation into aircraft accidents or incidents that occur in Ghana.

Additionally, the International Civil Aviation Organisation (ICAO) Annex 13 mandates that a State established institution of aircraft and incident investigation to carry out this function.

Consequently, the Aircraft Accident and Incident Investigation and Prevention Bureau (AIB) has commenced investigation into the aircraft incident.

Kennedy Agyapong sues Kelvin Taylor for defamation in US court