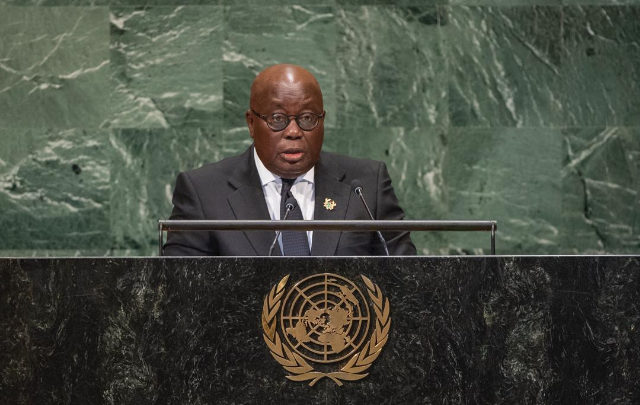 It will be the fifth time he addresses the UN General Assembly as President, having done so four times already in his capacity as President during his first term.

Today’s address is the first one in his second term as President.

In all previous addresses, President Akufo-Addo mounted the podium in person, apart from 2020 when, at the peak of the COVID-19 pandemic, the world body resorted to technology to address the global fraternity from the comfort of their offices.

When he mounts the stage at the 76th UN General Assembly at the UN Headquarters, situated in the Turtle Bay neighbourhood of Manhattan, New York City, the President is expected to touch on two vexed issues confronting the world — ending the COVID-19 pandemic and redefining the post-pandemic economy.

President Akufo-Addo is also likely to reiterate his clarion call on the developed world to see the urgent need to ensure a fairer distribution of COVID-19 vaccines among all nations, irrespective of their economic might, to deal with the increasing threat of the virus, which has been mutating.

Still on the pandemic, the President is expected to make a strong case for support for nations such as Ghana that have shown promising indication of manufacturing or replicating some of the vaccines and also putting themselves in good stead to deal with future outbreaks of viruses.

Referred to as the game changer, the African Continental Free Trade Area (AfCFTA), which is headquartered in Accra, is likely to find space in the President’s speech because he has always argued that trade, not aid, is the wand that will lift Africa from its current state to a developed one.

Africa contributes next to nothing in warming the globe, yet it is at the receiving end of the devastating effect of greenhouse emissions. Given such unfair natural occurrence, President Akufo-Addo will impress on his colleague world leaders to speed up activities to reverse the trend.

As the Chairman of ECOWAS, he is expected to make a strong case for support in fighting insurgents who are destabilising countries in the bub-region.

The President will, in the same vein, make a case for support in the fight to eradicate piracy in the Gulf of Guinea, which remains the world’s piracy hotspot in 2021, according to International Maritime Bureau’s latest figures.

Ghana and Nigeria are playing a leading role in the fight.

It expected that President Akufo-Addo, who is the co-Chair of the Group of Eminent Advocates of the SDGs, will touch on the need for reforms at the United Nations, especially the composition of its Security Council.

In his 2020 address, the President raised the issue of the effects of the COVID-19 pandemic on the lives of people and the benefits of technology in those difficult times.

He also touched on the need for the restructuring of the global financing architecture to enable access to fresh capital for developing nations, as well as a call to reform the world body to reflect Africa’s Common Position on UN Reform, as set out in the Ezulwini Consensus.

He further assured the world body of transparent, free, fair, safe and credible elections in Ghana in December of that year, adding that “at the end of the elections, we shall be proud of ourselves, Africa will have good cause to be proud of us, and the rest of the world will find lessons to learn from us”.

President Akufo-Addo and his entourage flew out of the country last Friday.

Prior to today’s address, he had engaged with some organisations, including addressing the 2021 SDGs Moment on the “Decade of Action” last Monday.