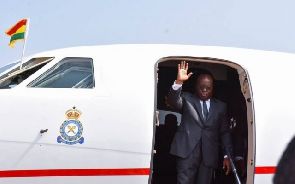 President Nana Addo Dankwa Akufo-Addo, left Ghana on Thursday, 8 August 2019, for a two-day official visit to the Republic of Angola, at the invitation of President João Manuel Gonçalves Lourenço. The visit, the first by a Ghanaian President, is aimed at deepening and strengthening the ties that exist between the two countries, as well as exploring possible areas of co-operation for their mutual benefit.Whilst in Angola, Nana Akufo-Addo will hold bilateral talks with his Angolan counterpart, and address a special sitting of the National Assembly.The President was accompanied by the Minister for Foreign Affairs, Shirley Ayorkor Botchwey, MP; the Minister for Energy, John Peter Amewu; the Minister for Fisheries and Aquaculture, Elizabeth Afoley Quaye, MP; Deputy Minister for Education, Dr. Yaw Osei Adutwum, MP, and officials of the Presidency and Foreign Ministry.Nana Akufo-Addo will return to Ghana on Friday, 9 August 2019, and in his absence, the Vice President, Alhaji Dr. Mahamudu Bawumia, shall, in accordance with Article 60(8) of the Constitution, act in his stead.Source: Ghana/ClassFMonline.com