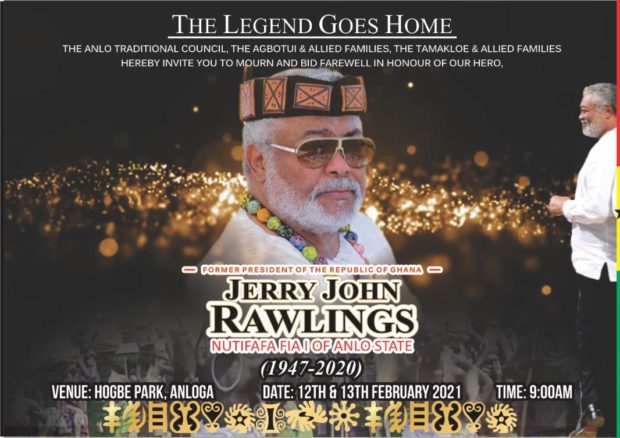 A planned funeral by the Anlo Traditional Council for former President Jerry John Rawlings has “fallen in water” following the latest ban on all social gatherings by President Akufo-Addo.

The Traditional Council reportedly boycotted the main funeral organized in Accra citing various including accusations that it was not duly consulted in many of the activities that took place.

As a result, the chiefs together with the Agbotui and allied families as well as the Tamakloe and allied families settled on 12th and 13th of February 2021 to mourn and bid farewell to the late Mr. Rawlings who was the Nutifafa Fia I of the Anlo state.

But the funeral is not likely to come off as planned considering measures being adopted by government to curb the increasing cases of Coronavirus which is claiming several lives and left the country’s hospital choked.

President Nana Addo Dankwa Akufo-Addo who addressed the country for the 23rd time on the measures his government has taken to combat the spread of the novel COVID-19 among Ghanaians said “The imposition of restrictions on our daily routines helped in reducing the prevalence of the pandemic in the country, and Government has been left with no option but to re-introduce some of these restrictions in order to help save the situation.

I know these measures, in the recent past, were unpleasant, but, over a period, they resulted in a favourable situation for our country. We have to return to them.

So, fellow Ghanaians, until further notice, funerals, weddings, concerts, theatrical performances, and parties are banned. Private burials, with no more than twenty-five (25) people, can take place, with the enforcement of the social distancing, hygiene and mask wearing protocols.

Beaches, night clubs, cinemas, and pubs continue to be shut. Our borders by land and sea remain closed.

Some Anlos have already taken to social media to Express their displeasure with the decision.

7 ways to make money while you’re still in school