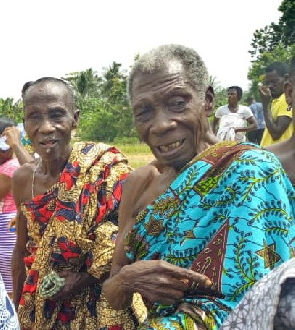 The chief and people of Akyem Eshiem, a farming community in the Asene Manso Akroso (AMA) District of the Eastern region are calling on government and authorities to provide the community with police station, market centre, Senior High School and a permanent dumping site.

Nana Kwadwo Koba , Amankrado of Eshiem, who led his people to make the appeal, said the request for the police post is to help ensure security protection in the area to ward off criminal activities.

According to residents, there has been rampant increase in crime, causing unlawful breakages, unlawful entry into homes and stealing of dried cocoa beans by unknown people creating fear and panic among the people living there. The chief indicated that, the only police post in the area is situated at Akroso which is far from the area.

Nana Kwadwo Koba made the appeal at a social auditing forum organized by the AMA District Directorate of the National Commission of Civic Education (NCCE) to promote community ownership of development projects and policies at the district.

The forum, which brought together duty-bearers, identifiable groups, traditional authorities, youth groups among others, was also to increase awareness of the citizenry on the operations of the Assembly as well as empower them to demand accountability from duty-bearers.

It followed the successful conduct of district-wide sensitization activities on the Accountability, Rule of Law and Anti-Corruption Programme (ARAP), sponsored by the European Union, to deepen the knowledge of the citizenry on corruption and accountability.

Social auditing is about integrating all groups of citizens in the decision-making process with particular attention to the vulnerable and the marginalized groups in society.

Nana Kwadwo Koba also appealed to the government to provide them with a market centre, a proper dumping site and a community Senior High School for residents.

Meanwhile, the NCCE in the district has also sensitized a number of identifiable groups including traditional authorities, women’s group and faith-based organizations among other from the various communities as part of the second phase of ARAP.

In an address the Birim Central Municipal NCCE Director who doubles as the Acting Director for Asene Manso Akroso District, Madam Rejoice Biscoff noted that, good governance involves making decisions and implementing the decisions in a manner that is participatory, consensus-oriented, accountable, transparent, effective and efficient and guided by the rule of law.

She explained that as a way of transparency, district assembly projects and programmes, ought to be brought to the doorstep of the citizenry, so that all stakeholders would contribute their quota to determine which way the Assembly must go.

The Birim Central Municipal Director of the Commission on Human Rights and Administrative Justice (CHRAJ) Mr. Cephas Atido noted that, corruption over the years has manifest itself in various forms, such as embezzlement of funds, misuse of official time, favourtism and nepotism among others in various institutions in the country.

He said, the effects of corruption was so apparent in the country and indicated that the response against corruption needed collective efforts of all. . Mr. Atido added that every Ghanaian must know that it is a national and constitutional duty to expose corrupt practices by reporting individuals and institutions that are alleged to be engaged in such practices to the relevant law enforcement authorities.

The Assembly Member for the area Mr. Ebenezer Arkorh applauded the NCCE for their social auditing programme and appealed to the government to support their effort to eradicate corruption