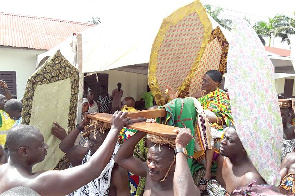 Kumasi is set to witness a cultural extravaganza on Sunday, April 21, when the Asantehene, Otumfuo Osei Tutu II, marks the 20th anniversary of his coronation with a grand durbar on Akwasidae k3se3.

The occasion will be the high point of the anniversary and thousands of Asantes and well-wishers from across the world, are expected to converge on Dwabrem of the Manhyia Palace for the event and share in the joy and glory of the anniversary.

Otumfuo Osei Tutu ascended to the Golden Stool on April 26, 1999.

On that momentous day, Barima Kwaku Dua, as he was then called, held in his right hand the Busumuru sword, and with his kuntunkuni ( black cloth) dropped to his chest, swore the oath of Asante to be faithful to his people

The programme, Graphic Online [Graphic.com.gh] has gathered is scheduled to start at 12 noon, but all the other chiefs attending the ceremony will sit before the celebrant, Otumfuo Osei Tutu, arrives.

The King, in all his royalty and elegance, will ride in a palanquin from the Palace to Dwabrem amidst the firing of muskets.

An opportunity will be given to the chiefs and invited guests to pay homage to the Asantehene who will sit in state.

Cultural displays from various groups will showcase the richness of Asante culture.

Otumfuo Osei Tutu will deliver his anniversary speech, while the Special Invited Guest, who will be coming from outside Ghana, and the Guest of Honour will also give speeches.

Organisers of the event were tight-lipped on the personalities attending the durbar but Graphic Online has gathered that President Nana Addo Dankwa Akufo-Addo will be in attendance.

The days leading up to the grand durbar have witnessed various activities both traditional and otherwise.

Flags and buntings in Asanteman colours of yellow, black and green adore the precincts of the Manhyia Palace and other parts of the city.

Akwasidae k?se? is the expanded form of Akwasidae, celebrated every six weeks in line with the Asante calendar which is based on a cycle of forty-two days and nine months in a year.

It is usually celebrated to climax activities marking specific milestones and achievements of the Asantehene and the Asante kingdom.
Besides, it provides a platform for Asantes to pledge allegiance to the kingdom and to affirm loyalty to the occupant of the Golden Stool.

Sika Dwa Kofi (Golden Stool) will be on display at the Akwasidae k?se? grand durbar of chiefs in Kumasi on April 21.

Regarded as the symbol of power of the Asante Kingdom, the Golden Stool comes into public view on special occasions.

The last time it was brought into public was during the final funeral rites of the Asantehemaa, Nana Afia Kobi Serwaa Ampem II in December 2017.

History has it that the Golden Stool was commanded from the skies by the high priest, the legendary Okomfo Anokye, and landed at the feet of Opemsuo Osei Tutu, the founder of the Asante Kingdom.

Okomfo Anokye, who was said to possess extraordinary powers, assisted Opemsuo Osei Tutu, his great friend to build a strong army that won several battles in the Asante wars of conquest.

Writing on the Golden Stool, Baffour Osei Akoto Amoatin, the Chief Executive of West African Promoters for Cultural Heritage said it is made of solid gold fitted with precious beads and traditional amulets.

“Suspended on the stool are seven bells from one end to another. Each of these bells is embossed with effigies,” Baffour Amoatin wrote.

The Golden Stool has its own chair on which it rests and also has its own umbrella and guards.

For Asantes, the protection of the Golden Stool is paramount because it binds them together as one people with a common destiny. 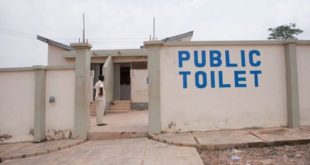