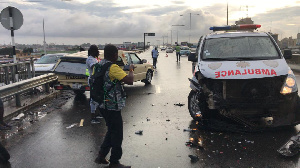 • The ambulance was damaged in the front after the collision

• The ambulance was carrying an 80-year-old woman

An ambulance carrying an 80-year-old woman has been involved in an accident at the Kwame Nkrumah Interchange in Accra.

Photos on Ghana Broadcasting Corporation’s Twitter handle show the damaged ambulance in the middle of the uppermost-level of the interchange.

From the photos and video showing the accident, it appears the accident was a head-on collision.

According to the reports on the ground, the accident was caused by a Mazda car although that has not been independently confirmed by any authority.

It is however worth mentioning that rains in the early hours of Friday, October 1, morning flooded a number of roads in the capital.

The situation also caused a number of major roads to experience heavy traffic.