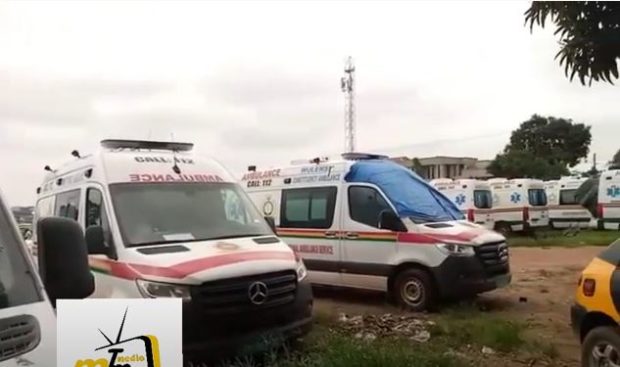 “The work that the ambulances do is too much, I can tell you that one ambulance can work on more than 15 cases in one day. This is so with the ambulances in the urban areas. Also, the poor nature of our roads is a contributory factor to the ambulances breaking down. So if you see that some ambulances have broken down despite being in operation for a little over one year it should not be surprising.,” Simmons Yusif Kewura PRO of the National Ambulance Service said in an interview on Kasapa FM Friday.

This comes on the back of a viral video that showed close to 30 ambulances parked in a workshop in Tafo in the Ashanti Region some broken down with a voice-over on the video indicating that they have been abandoned.

In the video, ambulances from the Ashanti, Bono, and Northern Regions are seen, some of them damaged through accident.

But Simmons Yussif Kewura clarified that the parked ambulances have not been abandoned but are there for routine servicing and repairs.

He added that the location where the vehicles are parked is the designated Ashanti Regional workshop of the Service located in Kumasi where the Service undertakes the routine maintenance, servicing and repairs of all the Ambulances in the middle and Northern sectors.”

Drivers with fix unapproved lights on their vehicles face prosecution