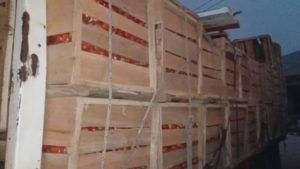 Ghana could face shortage of tomatoes in the coming days as tomato traders at Kintampo have impounded 10 trucks of tomatoes from neighboring countries amid a strike.

Following the indefinite strike undertaken by the Tomato Traders and Transporters Association last week over robbery attacks, the Association has started impounding trucks loaded with tomatoes from neighbouring countries.

As at 10:pm on Sunday, over 10 trucks loaded with tomatoes from either Niger or Burkina Faso had been impounded at Babato-Kuma/Suronuase Tollbooth in the Kintampo Municipality of the Bono East Region.

The members, led by their national chairman, were in red bands and chanting songs to demonstrate their disappointment in other drivers who had defied the orders of the Association and had gone out to import tomatoes into the country.

Speaking to Adom News’ correspondent, Nana Wiafe Akenten, the chairman disclosed that the injustices metted out to the members were becoming too many and it was about time the government acted.

Mr Akenten explained that clarion calls have been made to the Inspector General of Police to help clamp down on the robbers but nothing concrete has happened, hence their decision to take matters into their own hands.

He added that the protest will continue for a week more, until the government is pressured by their cries.