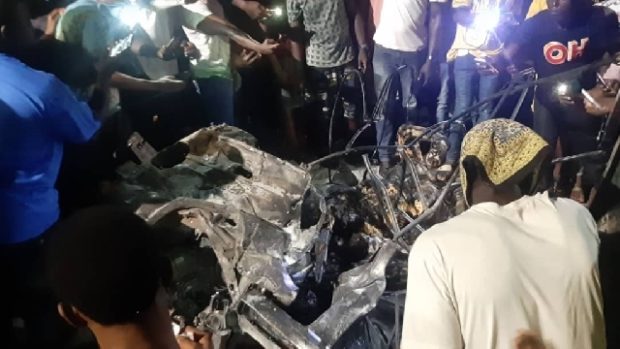 The driver of the Hyundai truck that allegedly experienced a brake failure and crashed into a rickshaw which led to the incineration of three occupants at Anloga Junction at Kumasi in the Ashanti Region, Alidu Mohammed, has been arrested by the police.

The suspect is currently on admission at the Kwame Nkrumah University of Science and Technology (KNUST) hospital.

He is being kept under police watch.

Confirming the incident to Class91.3FM’s Ashanti regional correspondent Elisha Adarkwah, the Regional MTTD Commander, Superintendent Emmanuel Adu Boahen, said: “The Police had information that, there was an accident at Anloga junction around 7.30 pm involving a Hyundai Meti Truck with registration number GC3897-20 which was loaded with some goods from Accra towards Paga. So on reaching Oforikrom, descending the hill through to Anloga junction, it is alleged, we are still investigating, that the vehicle had a brake failure and the driver was trying to manoeuvre to make sure that he avoided the crash but unfortunately, it crashed into a tricycle popularly known as Pragya, which was also having three passengers on board.

“They were trapped, the said vehicle dragged them to a distance the tricycle caught flame with these occupants and then the police came with the fire service and other sympathisers and assisted the police. By the time we were able to get the Pragya and the three people who were on board, they were already burnt beyond recognition. The bodies have been sent to Okomfo Anokye Teaching Hospital morgue for preservation, identification and autopsy.”

Superintendent Adu Boahen also revealed that five other vehicles got damaged due to the accident.

“About five vehicles also got damaged as a result of this accident. Three people were sent to the University hospital including the driver of the truck who is also receiving treatment from there.”

He indicated that the driver of the truck has been arrested.