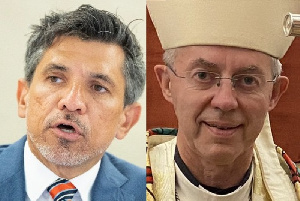 • One of the most recent being the Archbishop of Canterbury

• His views have been supported by the UN expert on sexuality

This is the second time in the last few months that he is commenting on the Bill, this time backing the position advanced by the leader of the global Anglican Church, Justin Welby, the Archbishop of Canterbury.

In May this year, he was part of a group of human rights experts who strongly opposed the Bill properly named the “Promotion of Proper Sexual Rights and Ghanaian Family Values Bill, 2021.”

In a tweet quoting the Archbishop’s October 26 tweet, Madrigal wrote: “Last May 17th I joined 115 global and regional human rights experts to state that LGBT and gender diverse persons must be recognized as worthy of love and belonging.

“I welcome this clear statement by the Archbishop of Canterbury, which speaks to this truth,” he added.

The Archbishop’s original tweet read: “I am gravely concerned by the draft anti-LGBTQ+ Bill due to be debated by the Ghanaian parliament. I will be speaking with the Archbishop of Ghana in the coming days to discuss the Anglican Church of Ghana’s response to the Bill.”

Attached to the statement was a statement advising the Ghanaian Anglican community to remember that the Anglican Church believed in the conservative understanding of marriage being between man and woman.

But also that it had resolved in two latter-day positions to also allow people will same-sex orientation to be accepted by the Church because essentially, Christ loves all persons irrespective of sexual orientation.

The Archbishop of London also backed the tweet of Welby, even though their views have largely been rejected by Ghanaians via traditional and social media.

Source: www.ghanaweb.com
Related Topics:LGBTQ
Up Next

Sintim vs Ocloo: The High Court ruling that set social media on fire this week