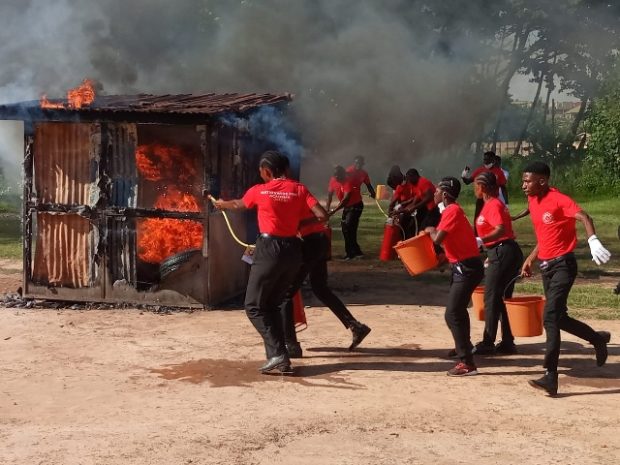 The Member of Parliament for Anyaa Sowutuom, Dr Dickson Adomako Kissi, and German firm PS Trade, have trained 200 youth in the constituency in firefighting to augment the work of the Ghana National Fire Service by acting as first respondents to fire outbreaks in the Constituency.

The youth who were enrolled on the Nationwide Fire Academy programme were taken through weeks of intensive training by personnel from the Ghana National Fire Service.

They were also introduced to international fire fighting equipment and skills by German-based firm PS Trade.

Speaking at the maiden graduation ceremony of the Academy, Anyaa Sowutuom MP, Dr Dickson Adomako Kissi said the program will not only deal with the unemployment situation in the constituency but also equip the youth to be fire fighting ambassadors to safeguard lives and property.

Explaining the rationale behind the initiative he said: “In our country, the fire service response to fires is difficult because of our roads (our roads are very bad), and getting to a place, it’s difficult for the Fire Service. And getting a location appropriately by the person making the call makes it difficult.”

“So, I thought of the idea of having local people in the various communities who can at least respond and give directions as to how to fight the fire before the fire engines come and also to use it as an avenue for advocacy and awareness creation on causes of fire and was ways to prevent them” he added.

For his part, the Greater Accra Regional Fire Commander, Assistant Chief Fire Officer I (ACFOI), Alhaji Nuhu Gibril said: “The Nationwide Fire Academy program is a welcomed project… The proactive way of approaching preventive fires is to educate the public, conscientise the public, create more awareness so that society will understand why they shouldn’t even start undesired fires at all”.

He added: “In doing that you need numbers and, so, when you have volunteers who are willing, as a society, as individuals of Ghana, who want to voluntarily support Fire Service, collaborate and then complement the efforts of Fire Service in going to all areas, educating the public, the dos and don’ts of fire and also serving as first respondents of fire in case of any outbreak before fire service comes, I would say that it is a wonderful project and we salute Hon Dr Adomako Kissi for this project”

The General Manager of PS Trade, Mr Christian Schneider, said: “We’ve been with NAFA from the initial stages with support from Germany and Ghana with training, with equipment and material and advanced products from Germany and Europe to train them as volunteers for the Fire service. Germany already has a long history of volunteer fire fighting so we think this initiative is quite impressive to see young people on the ground, how the students work and we had a lot of fun and engagement with them during the training and we saw a lot of development. Now we can say they are ready to start their volunteer duty in the communities”

Meanwhile, the Youth Employment Agency says it will prioritise the 200 volunteers in a yet to be rolled out program for the teeming unemployed youth.

Two KNUST students, one other killed by explosion at Juaben Oil Mills