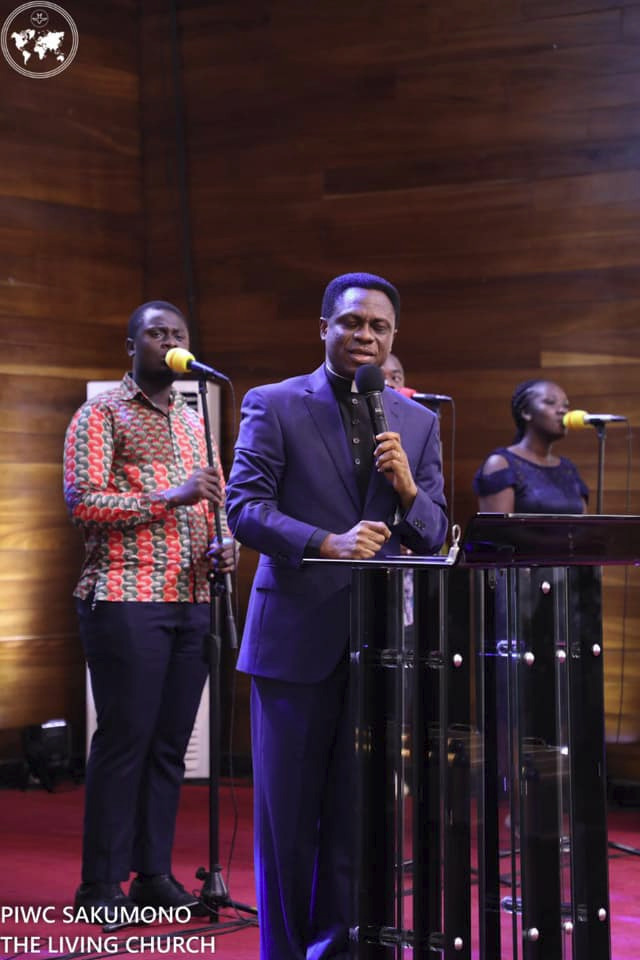 The Chairman of the Church of Pentecost, Apostle Eric Nyamekye has called on Christians who are bereaved to stir up their belief in the hope that Christ resurrected from death, and that those who die in Christ will live again in eternity.

Apostle Eric Nyamekye said this when he preached at PIWC Sakumono during the thanksgiving service of Brother Mark Ofosu Ampadu Jnr, on Sunday, February 9, 2020 at Sukumono inAccra.

Mark Ofosu Ampadu Jnr was a member of the Church who passed on to Glory recently and was laid to rest on February 7, 2020.

According to Apostle Nyamekye, neither science nor religion has been able to explain what death is about. “The question of death is a difficult one, how human beings depart from this earth, never to be seen again is mind boggling,” Apostle Nyamekye said adding, “As long as we are on this earth we will suffer at one point or the other.”

According to Apostle Nyamekye, death renders all men equal on this earth. “The rich, the poor, the black, the white, the young, the old, the aged and even children are all not immune against death, it is a road we will all travel.”

Reading from 1 Corinthians 15: 12, and speaking on topic, “The dead in Christ” Apostle Nyamekye said Paul in his writing to the Church in Corinth said a lot about death and that the church in Corinth in the midst of all their spiritual gifts still recorded death.

“Our God is the God of the living as well as the God of the dead,” he said adding, “We can ask ourselves all the questions of how believers lose their loved ones, however it is better to look at hope than to ask why disasters befall Christians.”

“Bear in mind that the secret things belong to God as scripture says, and in difficult times, when we do not understand our God, we should just thank Him,” he said.

Reading 1 Corinthians 15: 58, Apostle Nyamekye assured the family, the entire PIWC congregation to stand firm and not be moved by the loss of the young man.

“Just have faith in the Lord, He who has said he will neither forsake us will certainly be with us, adding, “The loss of a loved one is where reality challenges our very faith, however, let us learn to accommodate every condition or situation in which we find ourselves.”

Apostle Nyamekye prayed for the family and encouraged them not to lose hope in the Lord. “Some people pass on and their works do not follow them but our Brother Mark’s work has followed him and he is resting in the bosom of the Lord, in this life bad things can happen to good people, but this should not discourage the church, let turn it around for the good of the church.

The Resident Pastor, Anthony Owusu Sekyere Kwarteng extended an invitation to persons who have not accepted the Lord Jesus Christ as their Lord and personal savior. He also thanked the Chairman of the Church of Pentecost for coming over to PIWC Sakumono to console the church and the family of the late Mark Ofosu Ampadu Jnr.