Abdul Malik Kweku Baako, the Editor-in-Chief of the New Crusading Guide newspaper has opined that the Appointments Committee of Parliament cannot have the final say in the approval or disapproval of any of the ministerial nominees.

According to him, the Appointments Committee can only recommend to the plenary about which nominees to approve or disapprove and the final decision must be made “by consensus or majority decision by the plenary”.

Commenting on a Facebook post by US-based Ghanaian lawyer Stephen Kwaku Asare aka Kweku Azar, who suggested that the disapproval of Kojo Oppong-Nkrumah by the Appointments Committee, which Kweku Azar thinks the Majority of the plenary should reverse, Baako wrote: “but the Appointments Committee does not and cannot have a final say relative to the approval or disapproval process per the Standing Orders! It can only recommend approval by consensus or majority decision by the plenary.

Baako added: “My research findings (so far) show that it is/was on only one occasion that it “unanimously” recommended outright disapproval/rejection of a nominee to the plenary. Even then, some amendments had to be effected on the Committee’s report at the plenary. “De jure no. De facto yes” notwithstanding! Respectfully!!”

Kweku Baako Jnr. explained that he will be more comfortable with a recommendation from the Appointments Committee that appears negative because a negative recommendation to the House will “imply that the Committee’s report to the House is proposing that the nominees be either approved by consensus or majority decision (secret ballot)”.

“I am saying there’s nothing unprecedented or unusual about that [disapproval] factor; the present numerical circumstances of parliamentary representation notwithstanding. There have been instances of nominees who deserved to have been approved by consensus but were subjected to the option of majority decision at the plenary. And that didn’t take anything substantially away from them. Nothing devastating in my candid opinion!” Baako observed.

The report stated that the Minority side of the committee was not happy with Oppong Nkrumah, accusing him of instigating the Supreme Court judges to cite Dr Dominic Ayine for contempt in the ongoing election 2020 petition hearing.

On these rejections, Kweku Baako insists in his comment on Kweku Azar’s post: “I still don’t get your drift! Essentially and constitutionally, the Committee has no mandate (never had) to approve or disapprove any presidential nominee! NEVER! Some Committee recommendations have/had been disapproved by the plenary. These are part of the precedents and practices of the 4th Republican Parliament since 1993.

Baako further argued: “The point about ‘otherwise, there is no need for the Committee and the plenary should just vote directly on the candidates’ is unsupported by the dictates of the Constitution and the Standing Orders. It just doesn’t arise. And I don’t want to speculate on that scenario.

“It is not good not to come out of the Committee? Maybe. However, there may or could be many reasons why some nominees may “suffer” that deficit! I really do not put much premium on that factor, considering my estimation of the nature of the process..” 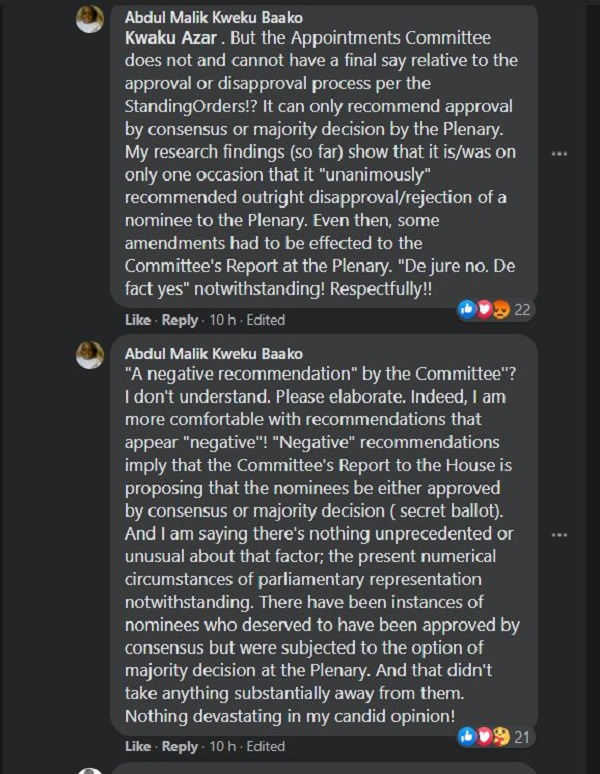 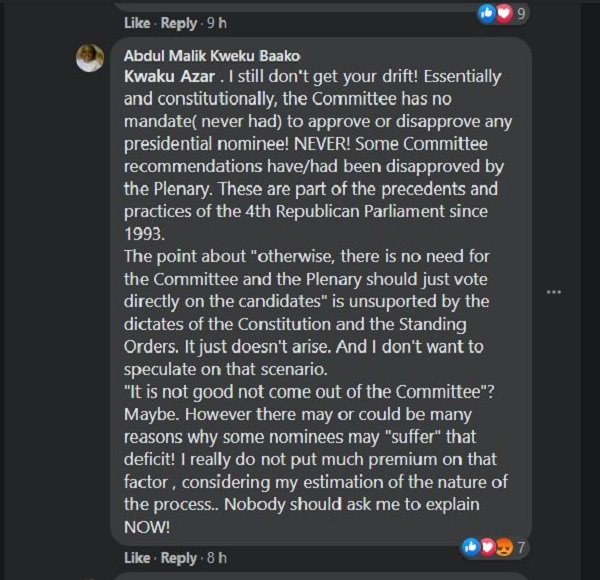