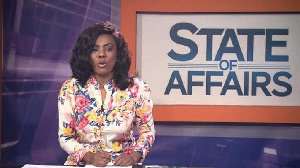 Celebrated television personality Nana Aba Anamoah has taken a swipe at some Members of Parliament who refused to self-isolate despite testing positive for the coronavirus.

It came to light on Wednesday, February 3, that some MPs who have been confirmed as coronavirus patients were disobeying the protocols with the ‘impunity of a dying a cockroach’.

The Speaker of Parliament who was clearly unhappy with this conduct of his MPs threatened to publish the names of the coronavirus patients if they do not adhere to the safety protocols on the virus.

“Some Members of Parliament who have in fact tested positive to the Covid are still coming to the Chamber. Mr Speaker wishes me to inform you that if those members do not withdraw and isolate, he will be forced to publish the names of members who have tested positive in order to warn the rest of us,” Bagbin stated in a speech read on his behalf by first deputy speaker, Joseph Osei-Owusu

Bagbin later revealed that fifteen MPs and 56 staff have been confirmed by the Noguchi Memorial Institute for Medical Research as Covid-19 patients.

The conduct of the MPs has been condemned by the Africa Centre for Parliamentary Affairs which called for the use of security forces to enforce the protocols on the virus.

“It’s very sad that it has got to this. We call our members of parliament honourable and the reason we do that is that everything about them has to be honourable. They are supposed to serve as role models for many people in this country so to hear that some of them have tested positive and they are meddling with the public is quite sad.

“Anybody who has tested positive and walking in the public is like someone who has death on their hands and going about spreading it to other people. I think beyond publishing names, the security forces might also be involved to enforce all the protocols that need to be enforced. In some countries, even when you are supposed to be in self-isolation and you flout it, you risk going to jail and being fined a huge penalty. We are living in this country and the people who are supposed to really know better are setting over the bar examples,’ Dr Dramani chipped.

Adding her voice to the call for MPs to show leadership, Nana Aba Anamoah asked if the MPs are in the right frame of mind to behave the way they are doing.

“You test positive for coronavirus and still go to Parliament. Are you mad? What kind of nonsense is this?” She tweeted.

Related Topics:NANA ABA ANAMOAH
Up Next