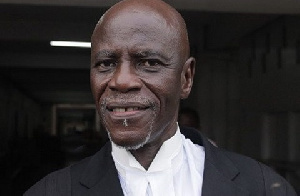 Lead Counsel for the second respondent in the election petition hearing has expressed displeasure about some portions of the witness statement presented to the Supreme Court by the Petitioner’s witness, Johnson Asiedu Nketia.

Lawyer Akoto Ampaw pointed out that some paragraphs in the document are untrue and not based on facts.

Among other things, Johnson Asiedu Nketia, who is one of the witnesses for former president John Dramani Mahama, alleged that, the first respondent’s affiliation with the wife of the second respondent reflected on her “biased” declaration of the election results on December 9, 2020.

Akoto Ampaw noted that the statements by Mahama’s witness were scandalous, prejudicial, and not relevant on the pleadings of John Mahama’s Petition document.

Addressing the 7-member panel of Judges presided over by Chief Justice Kwasi Anin Yeboah, he said,

“My Lord, we raise objections to certain paragraphs in the [witness] statement. They are not relevant nor based on the pleadings of their [Petitioners] petition, tends to unduly prejudice the party and are scandalous.

He thus prayed the apex court to strike out the paragraphs.
Lead Counsel of John Dramani Mahama, Lawyer Tsatsu Tsikata, however objected to the assertion by Lawyer Ampaw, stating that the points raised by Asiedu Nketia are in order and will be defended.

The Judges have ordered a brief adjournment after which a ruling on the objections raised by the second respondent will be given.

Related Topics:AKOTO AMPAW
Up Next