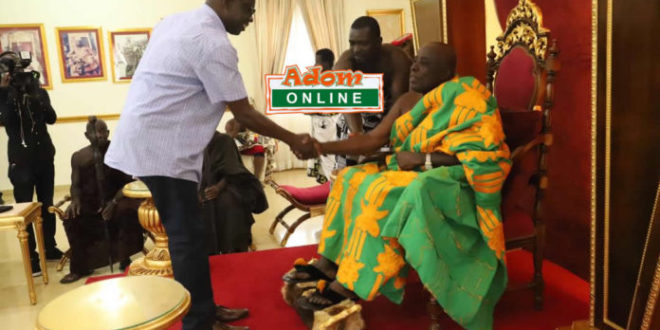 The Okyenhene made the suggestion when the Lands and Natural Resources Minister, Kwaku Asoma Kyeremeh paid a courtesy call on him
The Okyenhene, Osagyefo Amoatia Ofori Panin, has vehemently rejected government’s community mining initiative instituted by the Inter-Ministerial Committee on Mining as alternative to illegal mining.

Casting doubt over adherence to best practices and responsible mining when the initiative is finally rolled out, the Akyem Abuakwa overlord suggested that the government rather commits resources to the ‘Planting for Food and Jobs’ initiative than mining.

The Okyenhene made the suggestion when the Lands and Natural Resources Minister, Kwaku Asoma Kyeremeh paid a courtesy call on him at Kyebi in the Eastern region.

The visit formed part of the Minister’s five-day field visit to mining communities in the region.

The Akufo-Addo-led government made a strong case against illegal mining due to its devastating effects on lands, water bodies and forest in general and therefore placed a ban on the practice to enable the government to find better and lasting solution to its effect.

The Okyenhene, welcoming the Minister, said the ‘Planting for Food and Jobs’ initiative is more sustainable and has the potential of raking in more money for the country than mining which he says has contributed little to the economy.

Mr Kyeremeh, on his part, said he is in the region to explain the objective of the community mining initiative.