Connect with us
• Former Ghana striker, Nii Odartey Lamptey is heaving a sigh of relief after an Appeal Court threw out his ex-wife’s request to take ownership of his seven-bedroom house

• During their divorce, Gloria Appiah was given GHs200,000, as well other other benefits including a house

• As if to spite his ex-wife, a beautiful, new photo has emerged of the new family of the ex-player

A new family portrait of the family of Ghanaian football legend, Nii Odartey Lamptey, has emerged.

The ex-footballer has been in the news in the last few days following a ruling of an Appeal Court which threw out the case by his former spouse to own his seven-bedroom East Legon mansion.

Gloria Appiah had appealed to the court to take ownership of the former Aston Villa and Black Stars striker’s plush residence as part of her alimony.

It will be recalled that following the dissolution of their marriage in June 2017, a High Court Judge, Cecilia Don-Chebe Agbevey, ordered Gloria Appiah to vacate the footballer’s seven-bedroom mansion at East Legon.

This was after the judge had ordered her to be settled with GHC200,000, a car and Nii Odartey Lamptey’s house at Dome.

After this recent attempt, many people poured out onto social media to question if the ex-wife of the former footballer was a witch to be taunting a man she was so unfair to, for so many years.

As if to spite Gloria Appiah even more, a new photo of Nii Odartey Lamptey, his new wife, and their three children (a boy and two girls), has emerged.

In the photo, the entire family spots jeans shirts and dresses in a matching fashion. 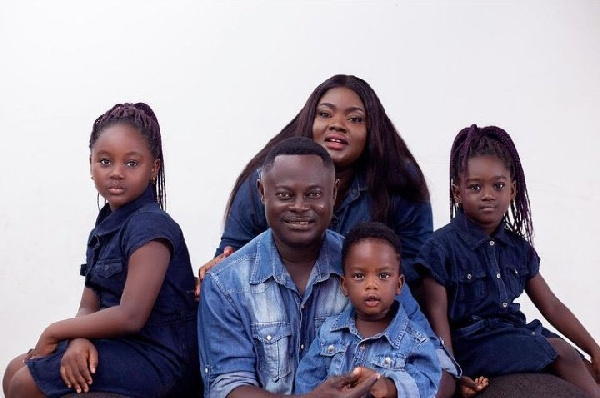 10 reasons you should never go back to your ex.