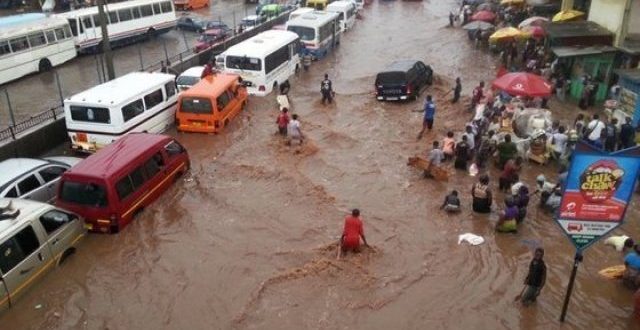 Blame KMA for the continuous flooding in Kumasi – NADMO Boss

The Ashanti Regional Director of the National Disaster Management Organization (NADMO) has laid blame on the doorstep of the city authorities after rainstorm on Thursday evening in Kumasi, the Ashanti Region capital left scores of people displaced after their homes were ripped off and parts of the city flooded.

“I blame KMA [Kumasi Metropolitan Assembly] for all these”, Regional NADMO Director, Mr. Kwabena Nsenkyere spoke a day after the incident during an interview MyNewsGh.com monitored on Abusua FM.

According to Mr. Nsenkyere also member of the KMA, it is the responsibility of the KMA to decongest some areas in the metropolis deemed flood-prone areas to avoid such calamities in near future.

Roofs were ripped off buildings and giant billboards fell, in some instances on moving vehicles, at Afful Nkwanta, Stadium and Asokwa, all in the Kumasi metropolis.

One person has been hospitalized after he was trapped for hours in his car, according to MyNewsGh.com reporters.

“I have done my part as Assemblyman of Dichemso but nothing is being taken serious by KMA and my next step is to have confrontation with my own people”, Mr. Kwabena Nsenkyere added.

Meanwhile, in Accra, the Ghana Meteorological Agency has predicted more heavy rains as the raining season sets in.

The Rawlings family has been under the media’s lens for years for various reasons, but …