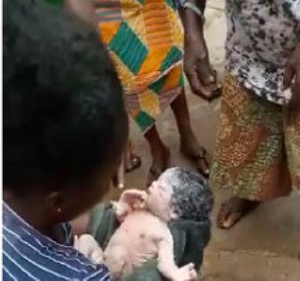 The baby that was thrown into a public toilet in Bole but survived has been discharged from the Bole hospital after staying in an incubator for about three weeks. The baby is currently under the care of a “temporal care giver”.

Asked about the processes involved before the baby can be adopted, the Bole District Social Welfare Officer Mr Tragott Kpadangle explained that when a baby is abandoned and the social welfare department is notified, they usually write a report on where and how the baby is found and together with a hospital report, the department goes to court and obtain what is called a “Care order”.

He said after the care order is obtained from the court, the Social Welfare Department then decides if the child should be placed into an institution like the children’s home (orphanage), where anyone interested in adopting the baby goes to do the necessary paper work after which the baby is given to the person. He said he is compiling his report which will be forwarded to the Bole Magistrate court soon.

The Bole District Social Welfare Officer disclosed that he has already written to the Bole hospital to hand over the baby to the Secretary of Bole based Nkilgi FM Madam Nana Adama Alhassan as a temporal care giver.

It would be recalled that the baby boy was dumped into a public toilet at Mempeasem in Bole in the Savannah Region on the dawn of 21st July, 2020.

The then newly born baby was wrapped in a polythene bag and disposed into septic of the public toilet.

A resident went to the public toilet at dawn and heard a baby crying inside the toilet’s manhole and called for help from neighbours near the toilet but they could not rescue the baby.

Personnel from Ghana National Fire Service were called to the scene and they were able to rescue the baby who was then rushed to the Bole hospital.