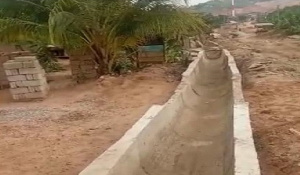 The Bortianor Hills Neighbours Association (BHNA) in the Ga South Municipality of the Greater Accra Region, has embarked upon a self-help development to improve the lives of residents and boost economic activities.

They have, therefore, began with the construction of a drainage system to pave way for a network of roads to be constructed to enhance vehicular movement.

The Chairman of the Association, Mr Paul Quarcoo, told the Ghanaian Times in an interview here at Bortianor at the weekend, saying the group formed about two years ago aimed to develop their community beginning roads and drainage systems which was a major challenge in recent times, whenever there was a downpour.

Against this background, he said the association mobilized resources through voluntary contributions in “cash and kind” to construct drainage to help reduce the effect of erosion on the roads in the community during the rainy season.

According to Mr Quarcoo, the association had so far constructed 520 meters (0.9mm) and 420 meters (0.6mm) drainage systems.

The GA South Municipal Assembly (GaSMA), he said assisted them with engineers and physical planners to help with the demarcation and construction.

Mr Justice Adoni, an Engineer with the Ablekuma Central Municipal Assembly, and executive member of the association also appealed to the Member of Parliament for Ga South Mr Sylvester Tetteh to assist them with more construction materials to complete the project and others.

Katamansu to UPSA Podium: How a herder became valedictorian at graduation