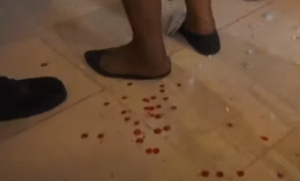 Some young jobseekers who thronged the Accra International Conference Centre (AICC) on Friday, 10 September 2021, got injured during a stampede as several of them attempted gaining access into the inner perimetre at a go.

Several companies, private and public, have mounted stands at the fair and were receiving CVs for instant recruitment.

A sudden rush by the jobseekers toward some stands resulted in a stampede, which got a few of them cut by shards of broken glass from a barrier.

Bloodstains could be seen at the scene of the stampede.

WATCH: Do or die’ t-shirts pop up on social media

VIDEO: I did not ‘finger’ her – Prisoner swears