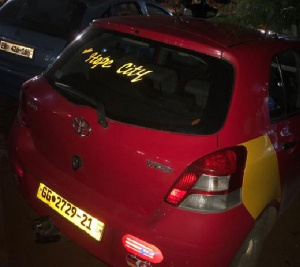 The Eastern Regional Police Command has arrested a suspected car snatcher who allegedly spiked a drink for a taxi driver and sent him to hospital for admission and attempted to run away with his car.

The incident occurred in Koforidua at about 5:30 pm on Friday.

The suspect, Evans Ahenful,31, hired the taxi driver in charge of a taxi cab with registration number GG 2729-21 and as part of the modus operandi allegedly gave him a drink laced with an unknown substance.

The driver began reacting to the drink by exhibiting wooziness, weakness, slurring among others.

The suspect took the driver to St. Joseph’s Hospital for treatment but while the victim was on admission at the ward, the suspect attempted to run away with the taxi cab but was noticed by a vigilant security man on duty who became suspicious and reported the incident to the Effiduase District Police.

The Public Relations Officer of the Eastern Regional Police Command, DSP Ebenezer Tetteh, told Starr News, “yes, the Eastern Regional Police Command has arrested suspect one Evans Ahenful, 31, who snatched a taxi cab from Koforidua and attempted to cross the main Koforidua-Accra checkpoint at Tinkong Barrier but based on intelligence he was intercepted. This suspect snatched the Taxi cab from his victim (driver) in Koforidua at about 5:30pm. The taxi cab with registration number GG 2729-21 was snatched from the Taxi driver after the suspect had taken the victim to the St. Joseph’s Hospital.”

He continued “the security man who saw the said suspect having brought the driver to the said Hospital on the same day saw the suspect driving the taxi out of the facility without the Victim. The victim who was at the ward was later brought to the police station at Effiduase with bruises on his body having allegedly been subjected to beating and given a malt drink suspected to have been laced.”

DSP Ebenezer Tetteh said because the driver was slurring among others “Police was unable to get meaningful information from him as a result of his condition. Based on few information that was received, intelligence was passed through various checkpoints in Koforidua Municipality and on the same day the driver pullout at the checkpoint attempted to cross to Accra with the said taxi cab.”

He said police is hoping that the victim recovers to provide more information to help police Investigation to facilitate Prosecution.

Source: starrfm.com.gh
Related Topics:Thief
Up Next