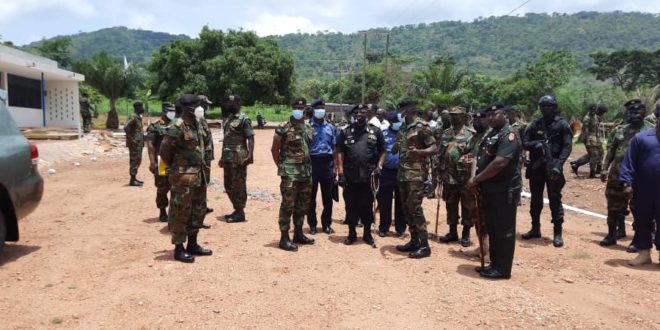 Newly appointed Chief of Defense Staff Vice Admiral Seth Amoama paid a working visit to the Volta region on Thursday to inspect military installations, units, and institutions in the region.

The visit which forms part of a nationwide tour is to also enable the newly appointed security Chief the opportunity to interact with troops in the Volta region.

Vice Admiral Seth Amoama and his team first arrived at the 66 artillery regiment in Ho, where he inspected some facilities including the 7 Medical Reception Station and a housing unit which is currently under construction at the regiment.

He then proceeded to the 66 Artillery training school, located at Akoefa -on the Eastern borders of Ho, where he inspected a guard of honour and the training facility.

In an interview with EIB Network’s Faisel Abdul-Iddrisu, Vice Admiral Seth Amoama explained the purpose of his visit while noting that his observations on the tour would inform whatever decision is taken at the administration level of the Ghana Armed Forces.

He said, “The purpose of visiting this unit is part of a nationwide visit to all military Garrisons in Ghana and so I started from the units in the North, Ashanti, Sunyani and today is the turn of units in the Volta region. The purpose is to interact with the troops, officers and men to know their challenges, their concerns and their needs that will inform us and the strategy to adopt going forward.”

He stressed that, “I appreciate the fact that they have serious challenges in terms of equipment, in terms of accommodation and so on and so forth and so when we go back to Accra, we know how to administer the Armed Forces to meet all their operational and logistic challenges. But it has been a very worthwhile visit because I know they are undertaking so many operations in the Volta region to secure the region and bring security; without security, we cannot see development and so they are doing a good work in maintaining security in the region and I came to motivate them.”

After to tour of Ho, the CDS proceeded to Sogakope where he was expected to undertake some other relevant activities and also a tour to the Agorta Naval training academy.

Vice Admiral Seth Amoama was appointed the Chief of Defense Staff of the Ghana Armed Force by President Akufo-Addo in January this year.

He replaced Lieutenant General Obed Akwa, who retired at the start of February 2021. Prior to his appointment, Vice Admiral Seth Amoama was the Chief of the Naval Staff of the Ghana Navy having been appointed in 2019.